A video of a group of children wearing hazmat suits has been viewed hundreds of thousands of times in social media posts that claim it shows them attending school in Shanghai during the city's Covid-19 lockdown. However, the video was actually filmed in China's northern Hebei province. Schools in Shanghai -- China's largest city -- reverted to online learning in mid-March and in-person classes were not scheduled to resume until June.

"This is how children go to school during the lockdown in Shanghai," reads a tweet posted here on April 30, 2022.

Traditional Chinese-language characters visible in the background of the clip translate to English as "Study hard and make progress every day". 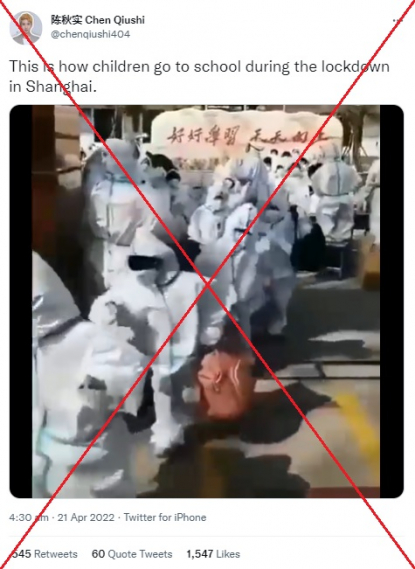 The video circulated online after Shanghai was almost entirely locked down in April when it became the epicentre of the country's worst coronavirus outbreak since the early days of the pandemic.

British tabloids The Daily Mirror and The Sun also claimed the video shows schoolchildren in Shanghai.

However, the video was actually filmed in China's northern Hebei province.

Schools in Shanghai reverted to online learning on March 12, weeks before the city's lockdown officially began.

Local education officials announced on May 26 that in-person classes would gradually resume from June 6, as the metropolis gradually emerges from a lengthy lockdown that brought it to a standstill.

A keyword search on Douyin, the Chinese version of TikTok, found this video uploaded on April 5.

Below is a screenshot comparison of the video shared in the misleading posts (left) and the Douyin video (right): 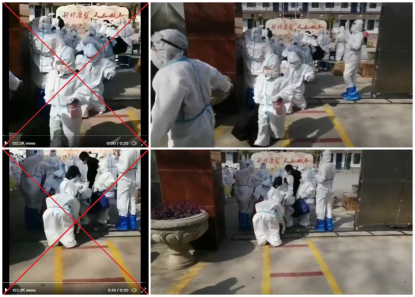 The Douyin video's description indicates it is from Jize county, which is in the northern Chinese province of Hebei -- around 1,000 kilometres (621 miles) from Shanghai.

A comparison of the Douyin video and a picture posted here on WeChat by the Jize Star Experimental School indicates the video was filmed at the primary school. 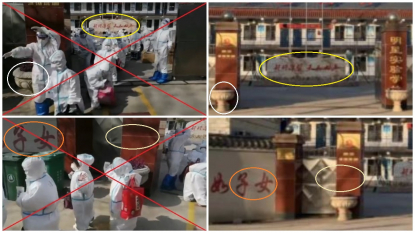 Screenshot comparison of the Douyin video (left) and the image published by the school (right), with matching features highlighted by AFP

AFP also found other videos published on Douyin here and here in early April that claim pupils from Jize Star Experimental School were sent to a quarantine centre.

According to a government statement published here by the Yanzhao Metropolis Daily, a government-controlled newspaper in Hebei, Jize county was under full lockdown in April following a Covid-19 outbreak.

The local education bureau published an article here on April 18 about officials visiting Jize pupils and teachers who were in quarantine centres.

AFP has previously debunked false claims about the lockdown in Shanghai here, here, here and here.