Two photos have been viewed thousands of times in Korean social media posts that claim they show Shanghai residents -- who have been under a strict Covid-19 lockdown since April 2022 -- protesting Chinese troops carrying out martial law in the megacity. However, the images have been shared in a false context; both predate Shanghai's weeks-long lockdown. One shows police drills in the southern city of Shenzhen in August 2019, while the second photo was from Hong Kong's pro-democracy protests in November 2019. AFP found no official reports or announcements stating that China had placed Shanghai under martial law as of May 3, 2022.

The images were shared together in a graphic posted on Facebook on April 25, 2022.

The first photo appears to show police equipped with riot gear, while the second shows riot police grabbing a person lying on the ground.

"Why is China performing a lockdown show with fake corona? Subtitle: Is this the beginning of a breakdown of China? Emergency - Martial law effectively declared in Shanghai, China. Civil resistance begins!" reads part of the Korean-language post caption.

The posts circulated online after most of Shanghai's 25 million residents were confined to their homes for weeks as the city battles a major Covid-19 outbreak.

However, the city has struggled to provide fresh food to those under lockdown while patients reported difficulties accessing non-Covid medical care, leading to small protests breaking out across Shanghai, AFP reported. 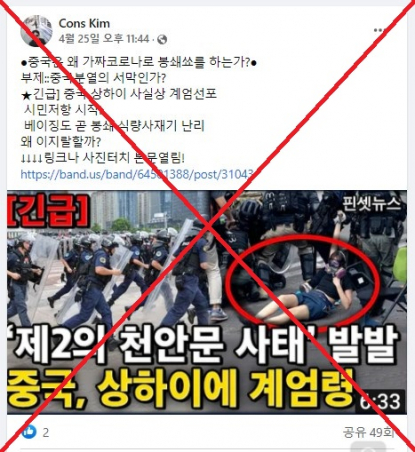 The "Tiananmen incident" refers to student-led protests in Beijing which were violently crushed by Chinese authorities on June 4, 1989.

The same graphic was also shared alongside a similar claim on Naver Band and KakaoStory, two popular social media platforms in South Korea.

The graphic was also used as a thumbnail on a YouTube video viewed more than 18,000 times. The video makes a similar claim using both real scenes from Shanghai and stock footage from other protests across the world.

However, the images have been shared in a false context; neither was taken in Shanghai.

A Google reverse image search found the first photo of police in riot gear matches an AFP photo taken on August 6, 2019 in the southern Chinese city of Shenzhen.

The photo caption reads in part: "This photo taken on August 6, 2019 shows Chinese police officers taking part in a drill in Shenzhen in China's southern Guangdong province, across the border from Hong Kong."

Below is a screenshot of the first photo shared in the misleading social media posts (left) and the AFP photo (right):

Screenshot of the first photo in the misleading posts (left) and the photo in AFP's archives (right).

The second photo corresponds to a photo taken by The Associated Press in Hong Kong on November 18, 2019.

It shows a protester being dragged by riot police during intense clashes at the Hong Kong Polytechnic University when officers laid siege to the campus while hundreds of pro-democracy demonstrators barricaded themselves inside -- one of the most violent chapters of the city's protest movement.

The photo's caption reads: "Police in riot gear drag a protester who was trying to flee from the Hong Kong Polytechnic University in Hong Kong, Monday, Nov. 18, 2019. Hong Kong police have swooped in with tear gas and batons as protesters who have taken over the university campus make an apparent last-ditch effort to escape arrest. (AP Photo/Ng Han Guan)."

Below is a screenshot comparison of the second photo shared in the misleading social media posts (left) and the original AP photo (right):

AFP found no official reports or announcements stating that China had placed Shanghai under martial law as of May 3, 2022.

In early April, Shanghai authorities took to Chinese microblogging site Weibo to deny claims that armed police had taken over the city, as seen here and here.

AFP has debunked other misleading claims about Shanghai's Covid-19 lockdown here; and claims that the pandemic is "staged" here and here.