A video of an elderly Buddhist monk has been watched more than a hundred thousand times on Facebook alongside a claim that the monk is 163 years old. The claim is false, according to the monk's grandniece, who told AFP he was 109 years old when he died in March 2022. The world's oldest-ever living person was a Frenchwoman who died in 1997 aged 122, according to the Guinness World Records.

The video, which shows a very old Buddhist monk in a saffron robe giving a blessing to a little girl, was published here on Facebook on April 28, 2022.

The Burmese language text superimposed on the video translates as: “The great monk who is 163 years old.” 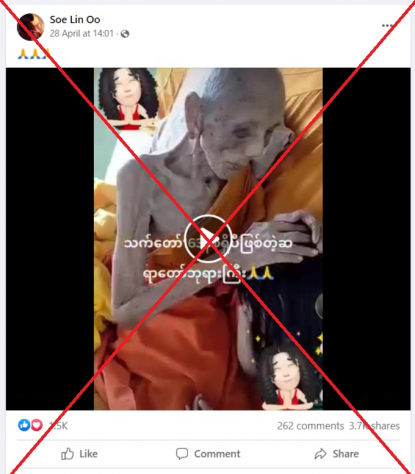 The video was also shared with a similar claim here.

A keyword search on TikTok found the original video was posted here on February 19, 2022.

Translated to English, the Thai-language caption reads: "When his great-granddaughter approached him, the monk felt love and care, he gave her a blessing."

The clip was posted on the TikTok account @auy.saranya, which had also uploaded other videos of the monk.

Saranya Khiewwilai, a Thai woman who runs the TikTok account, told AFP that the video shows her granduncle, the late monk Luang Ta Am Ka, giving a blessing to her daughter.

Saranya said Luang Ta, who lived in a village in Thailand's Nakhon Ratchasima province, was 109 years old when he died on March 22 this year.

"Based on the house registration, he was supposed to be 92, but his mother registered his birthdate late. His actual age was 109 years old," she said.

His death was also reported by local media outlet Thairath on March 24, 2022.

French nun Lucile Randon, known as Sister Andre, is the world's oldest known living person at 118 years old, after Kane Tanaka of Japan died in April 2022 at the age of 119.

The oldest-ever living person verified by the Guinness World of Records was Frenchwoman Jeanne Louise Calment, who died aged 122 in 1997.