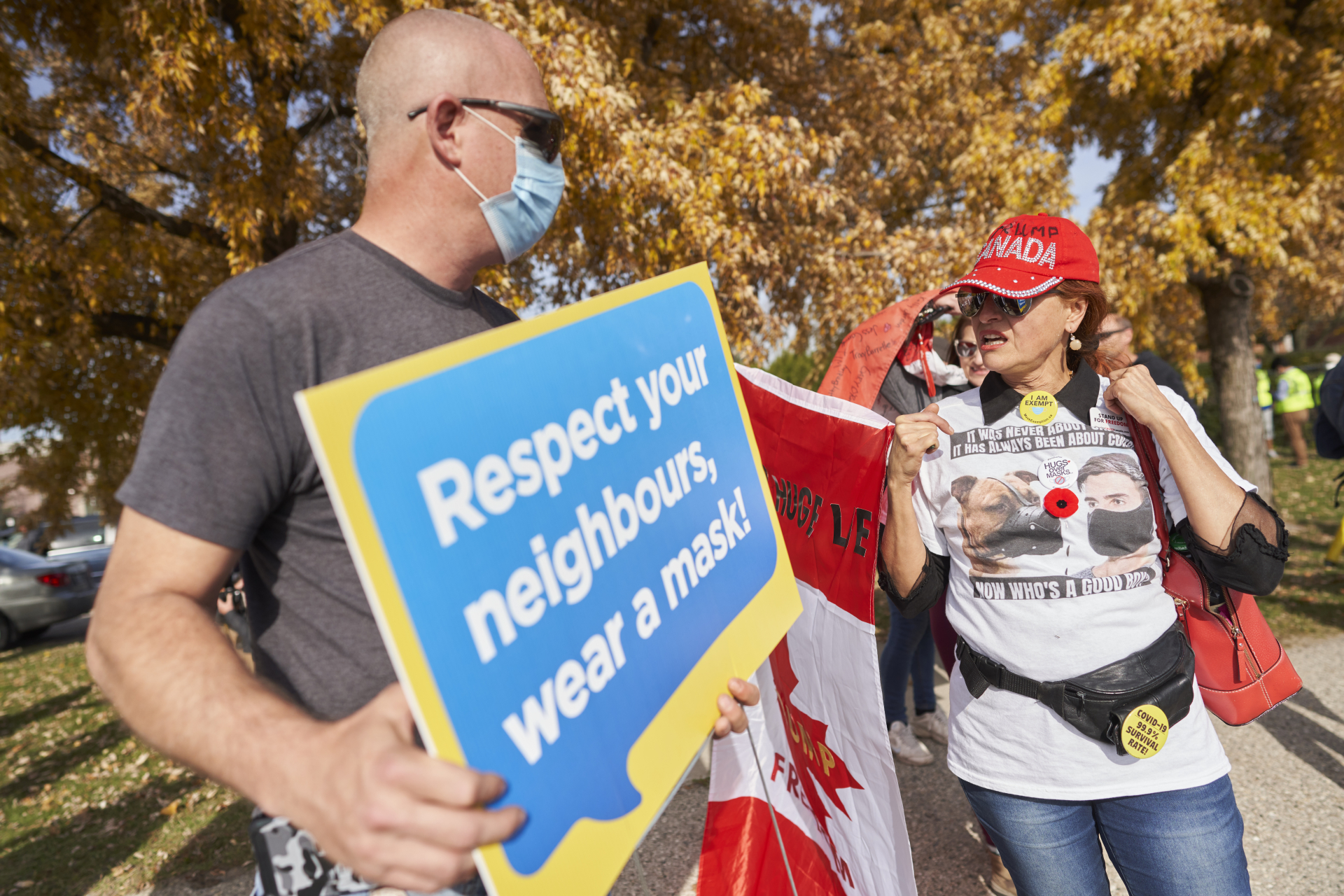 Coronavirus variants are not released as part of staged pandemic

A chart purporting to show a schedule of pre-planned coronavirus variants has been shared thousands of times on social media as proof of a baseless conspiracy theory that the pandemic was staged. But viruses mutate unpredictably, several of the variants have already been detected ahead of the supposed timetable, and the groups whose logos appear in the posts -- including the World Health Organization -- told AFP that the image is not genuine.

"These are the PLANNED VARIANTS with the dates when they will be 'released' to the media," claims a July 27, 2021 Facebook post. It shares an image of a chart listing variant names and dates, and goes on to claim: "The last 'Covid variant' is scheduled for February 2023, meaning by the end of 2023, 7 Billion people are scheduled to die. THEY WILL NOT STOP THE 'VARIANTS' UNTIL 7 BILLION PEOPLE ARE DEAD." 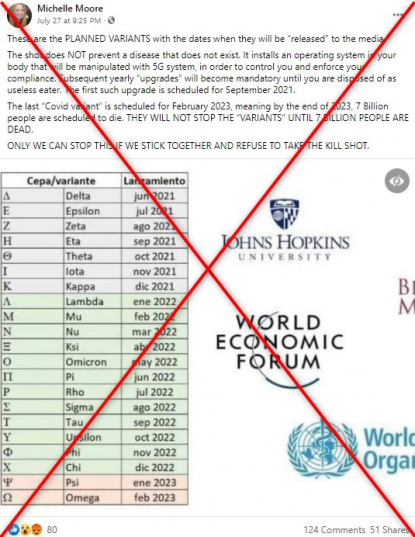 "ONLY WE CAN STOP THIS IF WE STICK TOGETHER AND REFUSE TO TAKE THE KILL SHOT," the post continued, feeding into widespread online misinformation questioning the safety and effectiveness of the vaccines.

The same image is also found in Facebook and Instagram posts making similar claims in English, as well as in French, Romanian, Indonesian and German posts.

Other similar posts here and here shared at the end of November 2021 in South Africa, include references to the recently discovered Omicron variant.

The table includes the logos of the World Health Organization (WHO), World Economic Forum (WEF), Johns Hopkins University and the Bill and Melinda Gates Foundation.

Asked by AFP about the chart, the WHO and the WEF said that it doesn't represent their work.

"This is not a WHO document," WHO spokesperson Tarik Jašarević said in an August 2, 2021 email.

Chloe Laluc, from the Public Engagement department of the WEF, also told AFP on July 28, 2021: "We have not seen that image before and were not involved in its creation."

The Bill and Melinda Gates Foundation press office addressed the larger claim that the coronavirus variants were pre-planned, calling it "false."

These organizations have been the regular target of misinformation during the pandemic, particularly Gates, who is a focus of conspiracy theories, including the false claim that he aims to put microchips into people via Covid-19 vaccines.

AFP has also debunked claims that the coronavirus was planned.

In addition to the misleading use of official logos, the dates circulating on social media do not match the actual timeline of when variants of SARS-CoV-2, the virus that causes Covid-19, were detected.

The WHO's official list of SARS-CoV-2 variants currently contains five "variants of concern" -- Alpha, Beta, Gamma, Delta and now Omicron -- as well as two "variants of interest" -- Lambda and Mu.

According to the table spreading on social media, the Delta variant was supposed to be "launched" in June 2021.

But this variant, which is one of the most transmissible, was first documented in October 2020 in India, as WHO's table shows. 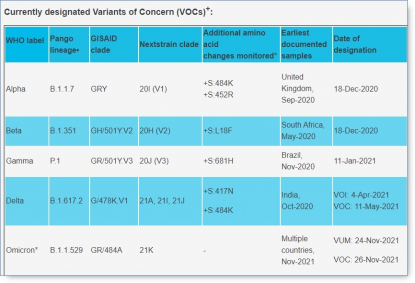 Screenshot taken on November 30, 2021 of the WHO website showing the variants of concern

Alpha, Beta and Gamma are not mentioned in the social media posts.

The schedule circulating on Facebook also claims the Eta variant would be launched in September 2021, Iota in November 2021, followed by Kappa and then Lambda in the following two months.

But these variants were all detected in late 2020. The Eta and Iota were labelled variants of interest in March 2021, while Kappa was added to this list in April and Lambda in June.

Screenshot taken on November 30, 2021 of the WHO website showing variants of interest

The B.1.1.529 variant was first reported to the WHO from South Africa on November 24, 2021, and classified as a “variant of concern” because of a large number of mutations.

Little is known about the new strain, but scientists are assessing its virulence.

The WHO cautioned in a technical note on November 28, 2021, that “the likelihood of potential further spread of Omicron at the global level is high."

The Omicron variant reflects the threat of prolonged vaccine injustice. The longer we take to deliver #VaccinEquity, the more we allow the #COVID19 virus to circulate, mutate and become potentially more dangerous. pic.twitter.com/tfN5SlBiA5

As reported by AFP, the early detection of the virus in southern Africa has led to dozens of controversial travel bans to and from the region.

“While investigations continue into the Omicron variant, WHO recommends countries to take a risk-based and scientific approach and put in place measures which can limit its possible spread,” it said in a statement on November 28, 2021.

Viruses routinely mutate and nothing about the emergence of variants of SARS-CoV-2 is evidence that the pandemic has been staged.

As explained in this AFP videographic, variants emerge randomly through the active circulation of the virus when it replicates inside a human host.

After entering a cell, the virus copies itself in order to spread. At each replication, errors can occur creating mutations which will, for some, have no major effect but, for others, can make the virus more infectious, more deadly or more resistant to antibodies.

Scientists use genome sequencing to identify new variants and study how they may impact health.

Catherine Hill, an epidemiologist at the Gustave Roussy Institute in France, confirmed the random nature of viral mutation.

"The virus mutates without intention and then there are selection systems which mean that if a variant has an advantage -- especially if it is more contagious -- it will gain ground," she said on July 14, 2021.

The announcement followed a leaked presentation from the US Centers for Disease Control and Prevention that warned that the Delta variant is as contagious as chickenpox.

According to specialists contacted by AFP, vaccination is the best way to curb the circulation of the virus, and reduce the risk of more resistant or more contagious variants appearing.

"The more circulation (of the virus), the more opportunities the virus has to find solutions to a problem such as vaccination or natural immunity," Crepey Pascal, an epidemiologist and biostatistician at the French School of Advanced Studies in Public Health, said in mid-February.

AFP Fact Check has also debunked the false claim that mass Covid-19 vaccination will lead to out of control variants.