Skip to main content
Protesters hold signs as they rally in support of Planned Parenthood and protest a state decision that would effectively halt abortions by revoking the center's license to perform the procedure, near the Gateway Arch in St. Louis, Missouri, May 30, 2019. ( AFP / SAUL LOEB)

Missouri did not ban emergency contraception

Posts on social media claim Missouri banned emergency contraception following the leak of a draft opinion from the US Supreme Court that would overturn Roe v. Wade, the landmark 1973 ruling that made abortion a right nationwide. This is false; the state's abortion legislation, which would take effect if Roe ended, makes no direct mention of contraceptives.

The claim started circulating after a tweet, dated May 8 and shared thousands of times, said: "Missouri will automatically ban Plan B if Roe is overturned."

The emergency contraceptive -- sometimes referred to as the "morning-after pill" -- has been a point of interest since early May, when Politico reported the Supreme Court's conservative majority was preparing to overturn Roe v. Wade.

Some Republican-controlled states, including Missouri, have "trigger laws" that, if Roe is reversed, will immediately restrict or ban abortion. But the Politico story has also fueled online misinformation about access to health care and reproductive medicine in some states, such as Tennessee. 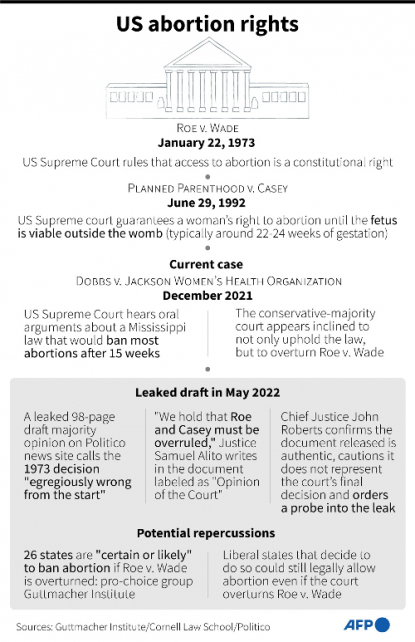 Similarly, claims that Missouri banned Plan B are incorrect.

Several legal experts told AFP the state's abortion law would not ban emergency contraceptives such as Plan B. However, the law's language on when life begins could potentially allow future modifications regarding access to medical products and procedures.

Missouri's 2019 abortion law -- titled the Right to Life of the Unborn Child Act -- does not restrict access to pregnancy prevention, a category that includes emergency contraceptives.

"The short answer is that Missouri has no current law in effect that would ban Plan B, and the law that is set to go into effect if the Supreme Court reverses Roe v. Wade does not name Plan B or other emergency contraception as prohibited," said Marcia McCormick, a law professor at Saint Louis University.

Sam Halabi, a law professor at the University of Missouri, told AFP that Plan B’s mechanism of action prevents fertilization, so it falls outside Missouri’s current statutory definition of abortion.

However, unlike Tennessee's abortion law, McCormick said Missouri's legislation "does not define pregnancy or limit the definition of abortion to a termination of a diagnosed pregnancy." Experts say that makes the law's scope potentially ambiguous, as Missouri stipulates that "life begins at conception."

Ann Marie Marciarille, a law professor at the University of Missouri-Kansas City, said: "I can see how the confusion might arise because answering this question requires looking at different statutory language where human life is defined as existing from the moment of conception."

She told AFP those who see the end of Roe as the start of a ban on all reproductive health products and procedures "are making a projection on how things will unfold, not describing a current ban on Plan B or IUDs, or certain kinds of fertility treatments in Missouri."