Skip to main content
Police stand in front of a Tops Grocery store in Buffalo, New York, on May 15, 2022 ( AFP / Usman Khan)

Posts shared thousands of times on social media claimed the gunman behind a deadly mass shooting in Buffalo, New York, had an accomplice who took a hostage. But local officials, who continue to investigate the crime, have said they believe the shooter acted alone, and a Twitter account behind the claim was suspended for violating platform policies.

The post includes a screenshot of a tweet that says: "I am Simon Butler I am a accomplice of the Buffalo sh00ter and have a hostage if he isn't released within the next hour I will start taking names." 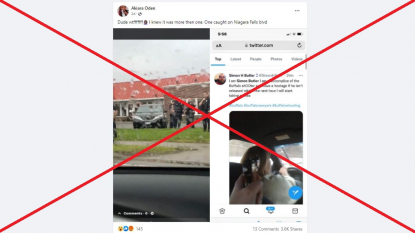 Similar posts gained traction on Facebook after Buffalo police arrested the gunman accused of killing 10 and injuring three in what authorities have called a "racially motivated" shooting at a Tops supermarket, which the FBI is investigating as a hate crime.

But the purported Twitter user who posted the claim was an imposter account that has since been suspended from the platform.  And local officials said they believe the shooter, who live-streamed the attack, acted alone.

A Twitter spokesperson told AFP in a statement that the account -- whose handle differs slightly from Butler's -- was taken offline for violating the platform's abusive behavior policies, which prohibit attempts to "harass, intimidate, or silence someone else's voice." 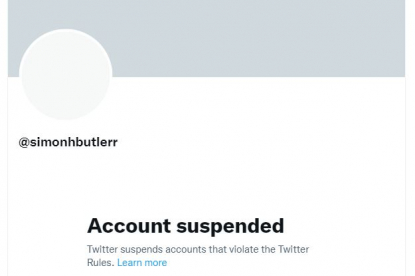 AFP could find no other evidence that the gunman behind the Buffalo shooting had an accomplice who recently took a hostage.

Buffalo police said during a May 16, 2022 press briefing that their investigation of the mass shooting at Tops was ongoing. Mayor Byron Brown said officials were also looking into threats made on social media.

"Late today, we have been made aware of many social media posts going around with possible threats," he said. "I want to be clear: Buffalo police and our partnering law enforcement agencies standing here are investigating these social media posts and will prosecute if necessary. And I want to emphasize: Arrests have already been made."

On May 15, 2022, police arrested a Buffalo man accused of making threats in phone calls to a local pizzeria and a brewery. Those calls allegedly referenced the shooting, according to the Erie County district attorney's office.

However, when it comes to the shooting itself, local officials have said they believe the gunman did not have an accomplice.

"At this point it appears that he was alone," Erie County District Attorney John Flynn said in response to a question during a May 14, 2022 press briefing.

Social media posts attributed to the shooting suspect, 18-year-old Payton Gendron, indicate he planned the massacre for months and scoped out the location ahead of time. Gendron -- who embraced the racist "Great Replacement" theory -- wrote that he targeted Tops due to the large African American population in the area, according to The Washington Post, which reviewed more than 600 pages of online messages.

AFP reached out to Buffalo police for additional comment.