Video shows a methane-powered bus that caught fire in Italy, not an electric bus in Kenya

A video has been shared online in Kenya alongside a claim that it shows an electric bus bursting into flames in Nairobi. But the claim is false: the vehicle in the clip, powered by methane rather than electricity, caught fire in Italy, not in Kenya.

A video titled, “KENYA ELECTRIC BUS CATCHES FIRE ALONG KAREN ROAD” was published on YouTube on April 19, 2022. On the same day, it was shared in a Facebook group with over 139,000 members. 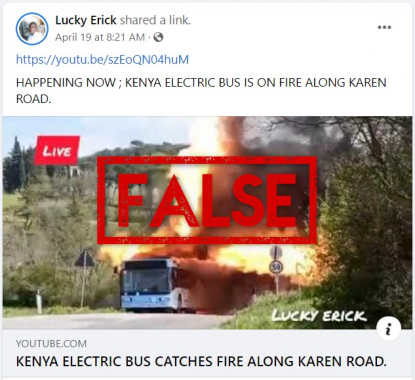 The clip was also published on Twitter, where it has been retweeted more than 100 times since April 19, 2022.

It was also shared on a Kenyan news blog called Sambazanews. This short article, which referred to a “video shared online”, claimed that the bus belonged to the electric vehicles company BasiGo.

However, this video does not show an electric bus burning in Kenya.

BasiGo spokesman Jit Bhattacharya told AFP Fact Check that the video does not show one of its electric buses and that none of its vehicles had caught fire.

“BasiGo has been alerted to rumours of one of our buses catching fire along Karen Road, in Nairobi. We would like to assure our passengers and the general public that these reports are false. We only have two buses at the moment as part of our ongoing pilot program that plies two routes: Allsops - Jomo Kenyatta Airport - to the CBD; and City Stadium to Dandora via Buru Buru,” said Bhattacharya.

Using the video verification tool  InVID-WeVerify, AFP Fact Check ran a reverse image search on keyframes from the video. This led us to a clip of the burning bus shared in news reports from Perugia, in central Italy.

Local media reports (here and here), published several days before the video surfaced in Kenya, explained that this bus was powered by methane.

One article, in Italian, explains that the bus – with only a mechanic on board – caught fire on the Strada Provinciale 344 (SP344) road in Perugia.

AFP Fact Check geolocated the video and found the location along the SP344 road.

A side by side comparison of the video and imagery from Google Maps shows matching features, including the same hill and trees, the same bushes alongside the road, the 50-kilometre-limit road sign, and a black and white post.

A side by side comparison of the two images

Not an electric bus

Stefano Pettinari, a spokesman of the Perugia Fire Department, confirmed to AFP Fact Check that the accident happened “along the SP344 Road near Perugia” in Italy and that the burning bus was "running on methane" with a reserve diesel tank. “If the methane tank runs out, it reverts back automatically to diesel”.

On April 16, 2022, Pettinari published a video of the remains of the bus after the fire had been extinguished on the Perugia Fire Department Facebook group.

The post, written in Italian, translates to: "At 3:15 p.m., two teams from the Perugia Fire Department responded to the burning of a methane-powered bus on Strada Provinciale 344, that leads from Ponte della Pietra to Marscianese. There were no passengers on board. A mechanic who was alone was testing the bus based on a reported malfunction and it caught fire due to an electrical shortage".

A spokeswoman for Ferrovie dello Stato, the company that operates the buses in Perugia, also confirmed to AFP Fact Check that the bus ran on “natural gas”.

Axel Opp, an electrical and electronic systems expert, told AFP Fact Check that the video would likely look very different if it had featured an electric bus: "The formation of the flames is absolutely atypical for the burning behavior of battery cells. If they were lithium cells, they would explode one after the other".

The video was also shared out of context in Austria, with claims that it was an electric bus but not that it was operating in Kenya. AFP Fact Check published a debunk of this claim in German.