No evidence that brown paper bags will ward off wasps

Facebook posts claim that hanging a brown paper bag in an area prone to wasp nests will keep them at bay. But experts say there is no scientific proof that this method will reliably ward off the stinging insects, and recommend calling pest control for help relocating nests from spots that pose a risk to humans.

"This is a great way to keep wasps away!!" says an April 18, 2022 Facebook post that urges people to hang a tied up brown paper lunch sack to scare off the pests. "All the wasps took off and we didn't see any since putting the bags up." 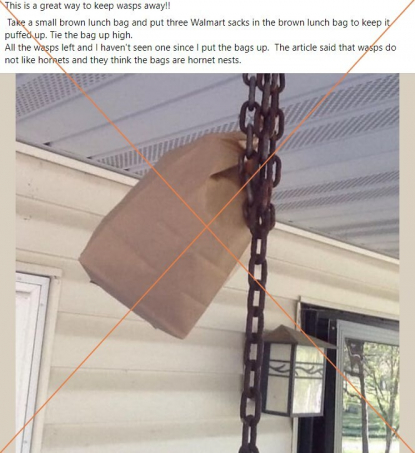 The homespun remedy to discourage the presence of wasps spread on Facebook, including here and here, as insect activity increases as North America warms up.

But there is no firm proof that brown bags have such an effect.

Eric Benson, an extension entomologist at Clemson University, told AFP: "If this worked, I'd be the first one singing its praises.

"There's just no good scientific evidence that this technique works. It's anecdotal hearsay from people that post these things."

Benson said it is unlikely any harm will come from hanging the bags, but he cautioned that it should not be the only action taken to protect humans, especially those allergic to stings.

Benson said people should remember that wasps are essential to natural habitats, urging vegetable gardeners to welcome them.

Michael Skvarla, an assistant research professor in the Department of Entomology at Pennsylvania State University, agreed. "Paper wasps feed almost exclusively on caterpillars, many of which are pests in gardens and on ornamental plants," he said.

Some comments on the posts expressed thanks for an alternative to using pesticide, but Skvarla said hanging a bag is unlikely to be effective, and cautioned that it could actually assist wasps in building a nest.

"Wasps may chew at the bag in order to make paper for their nests," he said.

The US Department of Agriculture website Pests in the Home advises trapping and nest removal to deal with wasps.

"The goal of wasp pest control should be to reduce human encounters, but not to eliminate wasps from the entire area since they are beneficial predators of insects," it notes.

Zachary DeVries, assistant professor in the Department of Entomology at the University of Kentucky, said wasps should be left alone unless the location of a nest will pose a risk to human health, and that he recommends hiring a professional to remove them.

"While homeowners can sometimes manage these on their own, the dangers/risks far outweigh the cost savings," he said.