Skip to main content
Bill Gates speaks during a panel discussion at the Munich Security Conference in Germany on February 18, 2022 ( AFP / Thomas Kienzle)

Elon Musk did not suspend Bill Gates from Twitter

Facebook posts claim Bill Gates was suspended from Twitter by fellow billionaire Elon Musk, who recently reached a deal to take over the social media company. But Twitter says it has not taken action against Gates' account, which is still online. 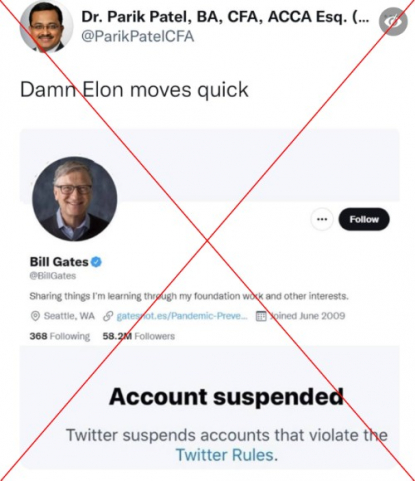 Another example of the claim appeared on Facebook here.

Tesla and SpaceX CEO Musk reached a $44 billion deal to buy Twitter on April 25, but as the world's richest man sold Tesla shares to finance the purchase, the automotive company's stocks plummeted, sparking speculation that this might deter him from following through on his offer.

The self-described "free speech absolutist" has vowed to reform what he sees as over-zealous policing of tweets.

The billionaires have previously found themselves at odds -- Musk accused Gates of betting against Tesla in the stock market, and Gates criticized Musk's comments about the pandemic.

But Twitter said it has not taken enforcement action on the @BillGates account, and searching the social media site shows that his profile is still active as of April 29.

Microsoft co-founder Gates has long been a target of conspiracy theories and misinformation, and AFP Fact Check has debunked other inaccurate claims about him here.