Skip to main content
SpaceX owner and Tesla CEO Elon Musk poses as he arrives on the red carpet for the Axel Springer Awards ceremony in Berlin on December 1, 2020 ( POOL / AFP / Britta Pedersen)

Social media posts claim a CNN news banner said billionaire Elon Musk, who recently reached a deal to buy Twitter, threatens freedom of speech on the social media platform. But the image came from a satire website that boasts of its role in spreading "fake news," and the broadcaster rejected the claim.

An April 28, 2022 Facebook post shared in a public group with 54,000 members features an image of an alleged CNN newscast with a chyron that says: "Elon Musk could threaten free speech on Twitter by allowing people to speak freely." 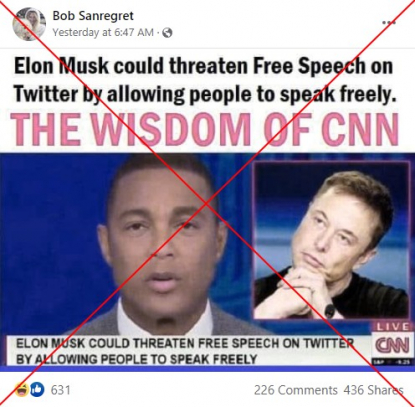 A self-described "free speech absolutist," the richest man in the world reached a $44 billion deal on April 25 to take over Twitter. The purchase has sparked false claims about Musk's actions on the platform.

Another example of the claim that appeared on Facebook here attributed it to "Genesius Times." A Google search for the name shows it is a satire website that identifies itself as "the most reliable source of fake news on the planet."

An article on the site includes the same image shared in the Facebook posts.

CNN spokesperson Jonathan Hawkins told AFP of the image: "This is very obviously faked. You can see the font is completely wrong and the entire lower third doesn't line up correctly with the logo."

Hawkins shared a photo of a real CNN newscast for comparison, included below. 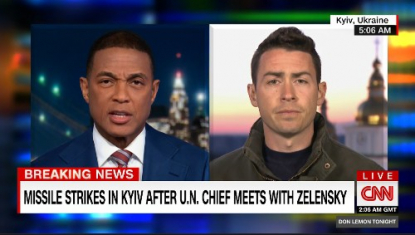 Image of a CNN newscast provided by spokesperson Jonathan Hawkins on April 29, 2022