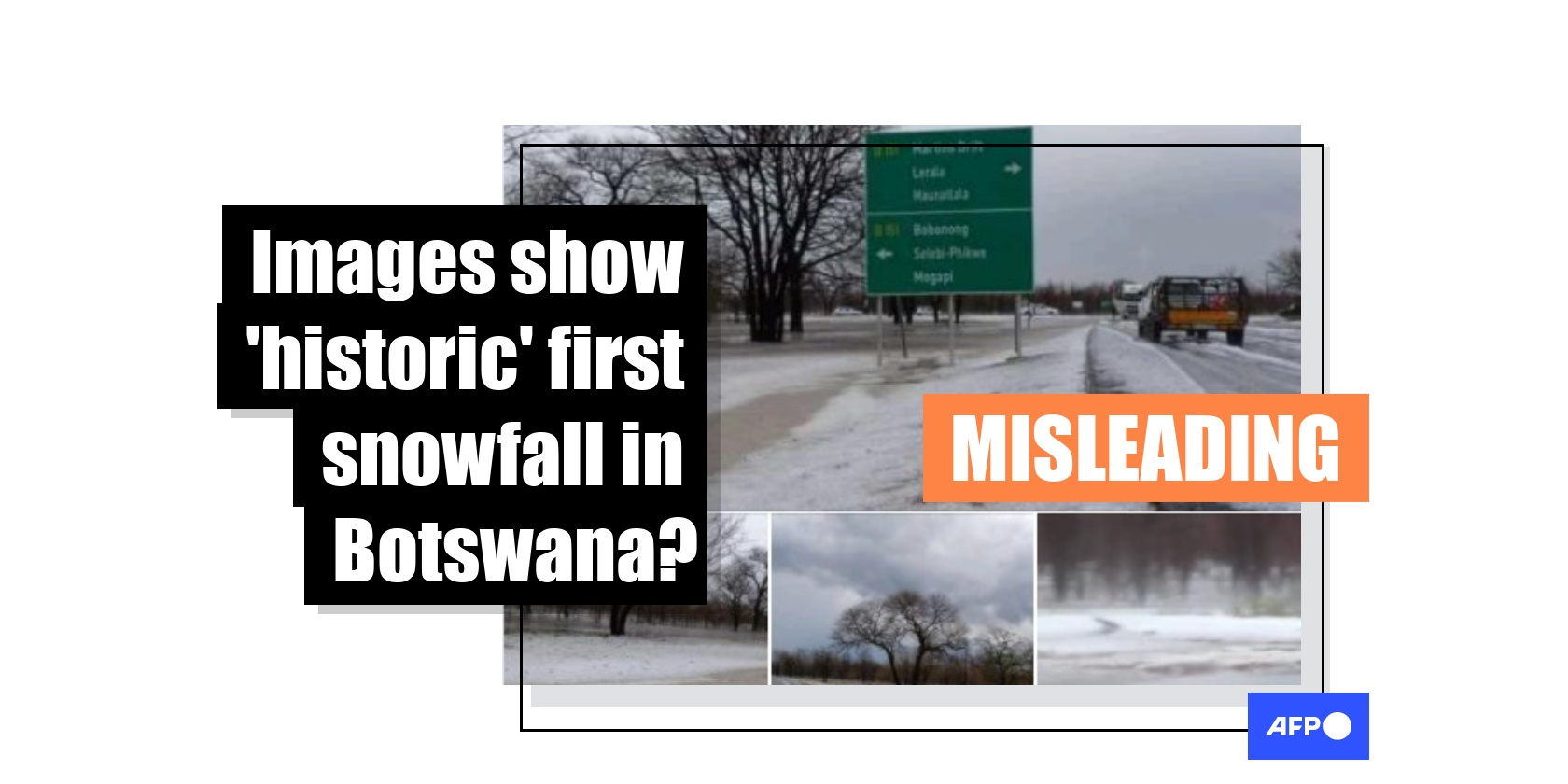 It was hail and not snow that coated parts of Botswana in April, weather experts said

Posts on Twitter and Facebook have shared various pictures of wet and slushy roads claiming the images capture the first snow ever to fall in Botswana. However, this is misleading; the images actually show the aftermath of a hailstorm, which is a common occurrence – and has previously sparked false claims – in Botswana, according to the country’s meteorological service.

A Facebook post published on April 16, 2022, and shared more than 7,000 times includes four photographs of ice-covered roads and overcast skies. One image features a signboard with the names of towns found in the southern African country of Botswana.

“Botswana is today experiencing snowfall for the first time ever.The snow was witnessed in the Central parts of the Country following a cold weather (sic),” read the post’s caption, adding that it was a “historic moment”. 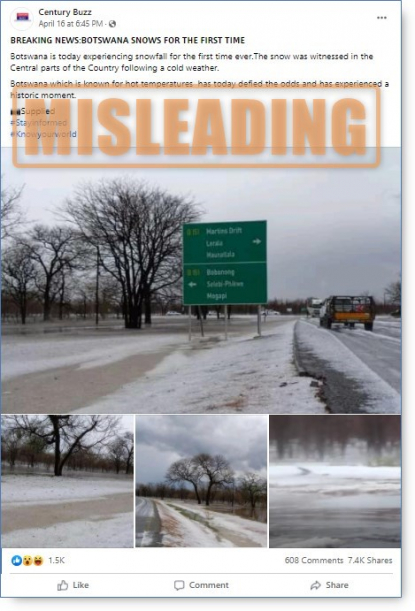 A day later, a fifth and separate image of a snowy-looking landscape with cars backed up on a road was shared on social media.

“SNOW FALL IN SEMI DESERT BOTSWANA,” reads the tweet from April 17, 2022. “In a rare occurrence, people of Botswana experienced London weather as there were treated to snow fall during this period which normally is a hot season. Infact the United Nations has issued a warning that Climate Change needs urgent attention (sic).” 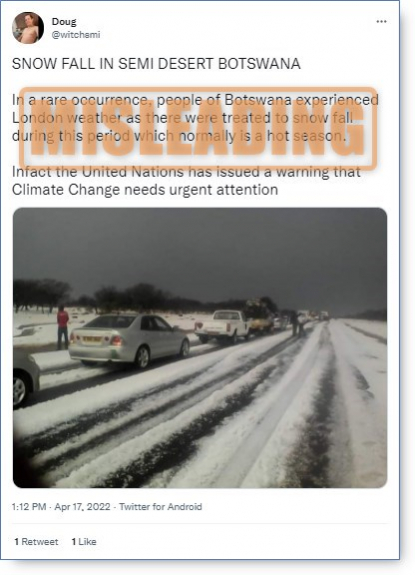 A screenshot of the misleading tweet, taken on April 22, 2022

A reverse image search found the same picture published with a near-identical caption in a Zambia Facebook group called “The Speech Analyst” more than three years ago, on October 13, 2018.

The image was credited to Emanuel Chibesakunda, founder of a tree-planting initiative in Zambia, although he denied taking the photograph when contacted by AFP Fact Check, saying it was snapped by a friend, who we were unable to reach.

Chibesakunda did confirm, however, it was hail in the picture, and not snow. Unlike on his Facebook post, also published on October 13, 2018, in which he wrote: “#ClimateChangeIsReal ! Snow in Botswana today!!!” 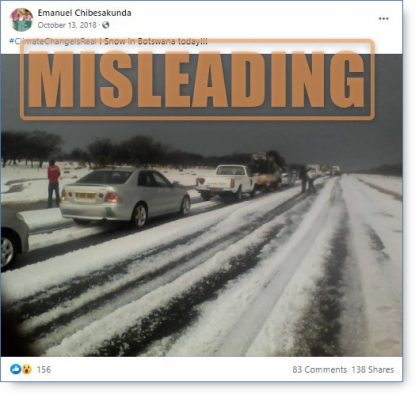 On that day, too, the same hailstorm received a mention on the Botswanan government’s official Facebook page, along with five images, one of them being the picture linked to Chibesakunda.

“It was hail, not snow. It has never, and I don't think it will ever, ever snow in Botswana,” said Linky Moreri, a meteorologist from the Botswana Meteorological Services.

Speaking to AFP Fact Check about the most recent claims of snow in her country, Moreri said a weather system that recently caused destruction in South Africa’s KwaZulu-Natal province also passed through the eastern part of Botswana, bringing thundershowers with hail, seen in the images falsely captioned on Facebook.

In fact, the inclement weather was forecast by the metereology service.

As reported by AFP, the floods in South Africa devastated the country’s southeastern province and killed at least 435 people, with more than 50 others still missing.

Hail or hailstorms are not uncommon in Botswana, as mentioned in this Facebook post by Botswana Meteorological Services on November 2, 2020, and another on November 19, 2015.

A 2020 storm destroyed hundreds of windows of cars and homes and killed cattle in Thamanga village.

At the time, the weather service told The Midweek Sun newspaper that it was a “special case” as the storm had only affected one village instead of the whole region.

Moreri told AFP Fact Check that the possibility of snow in Botswana was almost “zero” because of the flat landscape, unlike the mountains in Lesotho where it falls thickly.

“We are in the tropical region, so the precipitation that we receive here is thundershowers with rain or hail - that is what we usually receive here.”

As explained by Renee Duff, a meteorologist for online weather app AccuWeather, “unlike snow, sleet, freezing rain and graupel, which occur in colder weather, hail is most common in warm conditions”.