An image has been shared on Facebook in South Sudan alongside a claim that it shows a flooded road in the capital Juba in April 2022. But this is false: the picture has been online since at least 2016 and shows a flash flood in Johannesburg, South Africa.

The image was published on Facebook on April 21, 2022, and has since been shared more than 100 times and drawn hundreds of comments. 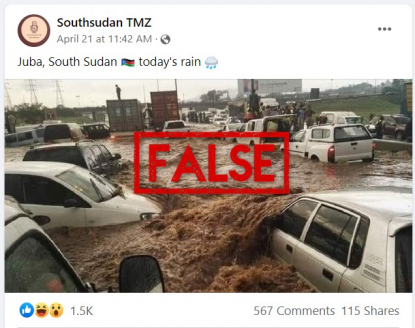 The picture shows several vehicles trapped in a flooded section of a major road.

According to the World Meteorological Organization, parts of South Sudan started receiving rains in early April. These are expected to increase in May, possibly leading to flooding and other devastation.

The country has been devastated by floods in recent years, with 2021 being the worst on record when more than 800,000 people were affected, according to the UN.

But the image shared on Facebook does not show flooding in Juba.

A reverse image search by AFP Fact Check found that the picture has been online since at least 2016 and shows a flooded road in Johannesburg, South Africa.

The image was tweeted on November 9, 2016, by South Africa’s Emerg-E-Med -- a private ambulance service operating in the provinces of Gauteng, Northern Cape, Mpumalanga, Free-State and KwaZulu-Natal.

#N3LinksfieldFlooding: One person is confirmed to have died. Multiple others sustained minor injuries, one being transported to hospital. pic.twitter.com/Bnxh41g0TI

Other versions of the photo were published locally (here and here), by an international media channel (here) and on the Johannesburg city municipality's official Twitter account (here) in November 2016.

According to media reports, the floods struck Johannesburg and nearby Ekurhuleni, killing at least six people and injuring several more.

Meanwhile, KwaZulu-Natal in South Africa is still reeling from torrential floods in April 2022 that have killed more than 400 people and displaced 6,000 others. 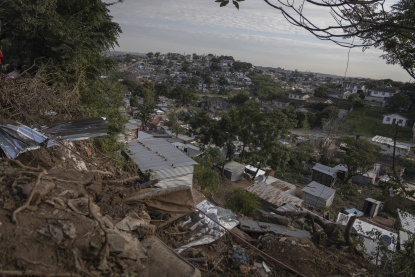