Skip to main content
In this photo taken on April 23, 2022, Philippine Vice President and opposition presidential candidate Leni Robredo speaks before thousands of supporters during a campaign rally coinciding with her birthday in Pasay, suburban Manila. ( AFP / Ted ALJIBE)

As incumbent Philippine Vice President Leni Robredo battles to close the gap with her arch-rival for the country's top job Ferdinand Marcos Jr, a purported news graphic claiming she warned of chaos if she were to lose the May 9 polls was shared hundreds of times on social media. However, the news organisation whose logo appears on the graphic has denied creating it. Robredo has also denied she ever made the claim, and AFP found no credible record of her issuing the warning.

The purported news graphic, bearing the logo of Philippine news organisation Rappler, was posted on Facebook on April 24, 2022.

It was shared more than 500 times before it was deleted.

It appears to quote Philippine Vice President Leni Robredo as saying on April 15 that she and her running mate Francis "Kiko" Pangilinan would be victorious in the upcoming presidential elections as long as there is no cheating.

The quote translates to English as: "Kiko and myself are assured of victory. If we lose, it means we were cheated. If we were cheated, there will be chaos."

The post's caption reads in part: "And it came from her! Instead of promoting peace, she's promoting war! That's why her supporters are war freaks because they learned from her…" 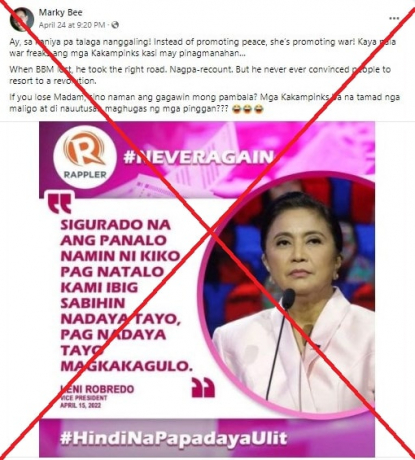 Voter surveys show Marcos Jr -- the son of former dictator Ferdinand Marcos -- heading towards a landslide victory in the presidential race, the endgame of a decades-long, well-funded effort to return the powerful clan to the presidential palace they fled 36 years ago.

But there are signs Robredo's pink-coloured campaign is finding traction, with huge rally turnouts, endorsements from pop stars and Catholic priests, and a bump in a recent poll raising hopes among her fervent fans.

The purported news graphic was also shared on Twitter here and here.

Comments on the posts suggest social media users were misled.

"Is this should be the mindset (sic) of a good leader?" one wrote in English.

"You are annoying! Such a promoter of trouble," said another in Tagalog.

The claim that Robredo had said "there will be chaos" if she loses the election also surfaced earlier, and three of Robredo's rivals were asked to respond to the alleged remark during a press conference on April 17.

During the vitriolic press conference, presidential candidates Francisco Domagoso, Panfilo Lacson and Norberto Gonzales -- who are polling at single digits or less -- accused Robredo of trying to get them to withdraw and strip them of support.

Responding to the posts, Rappler wrote on Facebook on April 25: "Rappler has nothing to do with this graphic and the overlaid quote was not said."

The news organisation's statement included a screenshot of the graphic that had been stamped "FAKE".

AFP performed multiple keyword searches on Google and found no record of Robredo issuing the alleged warning on April 15.

A review of her official website and social media accounts showed she staged no public activities on that day, which was Good Friday, when campaigning was prohibited.

Robredo's camp sent AFP a transcript of a local media interview on April 21 where the presidential hopeful said she "never" issued the alleged warning.

Rappler reporter Mara Cepeda tweeted on April 17: "FACT: Been covering VP Leni Robredo's presidential campaign since she declared her candidacy. NEVER did she say there would be chaos if she loses this race."

Krixia Subingsubing, reporter for broadsheet Philippine Daily Inquirer, wrote on the same day: "We've been on the trail since Day 1 and we have never heard her even warn people that there would be chaos if she loses."