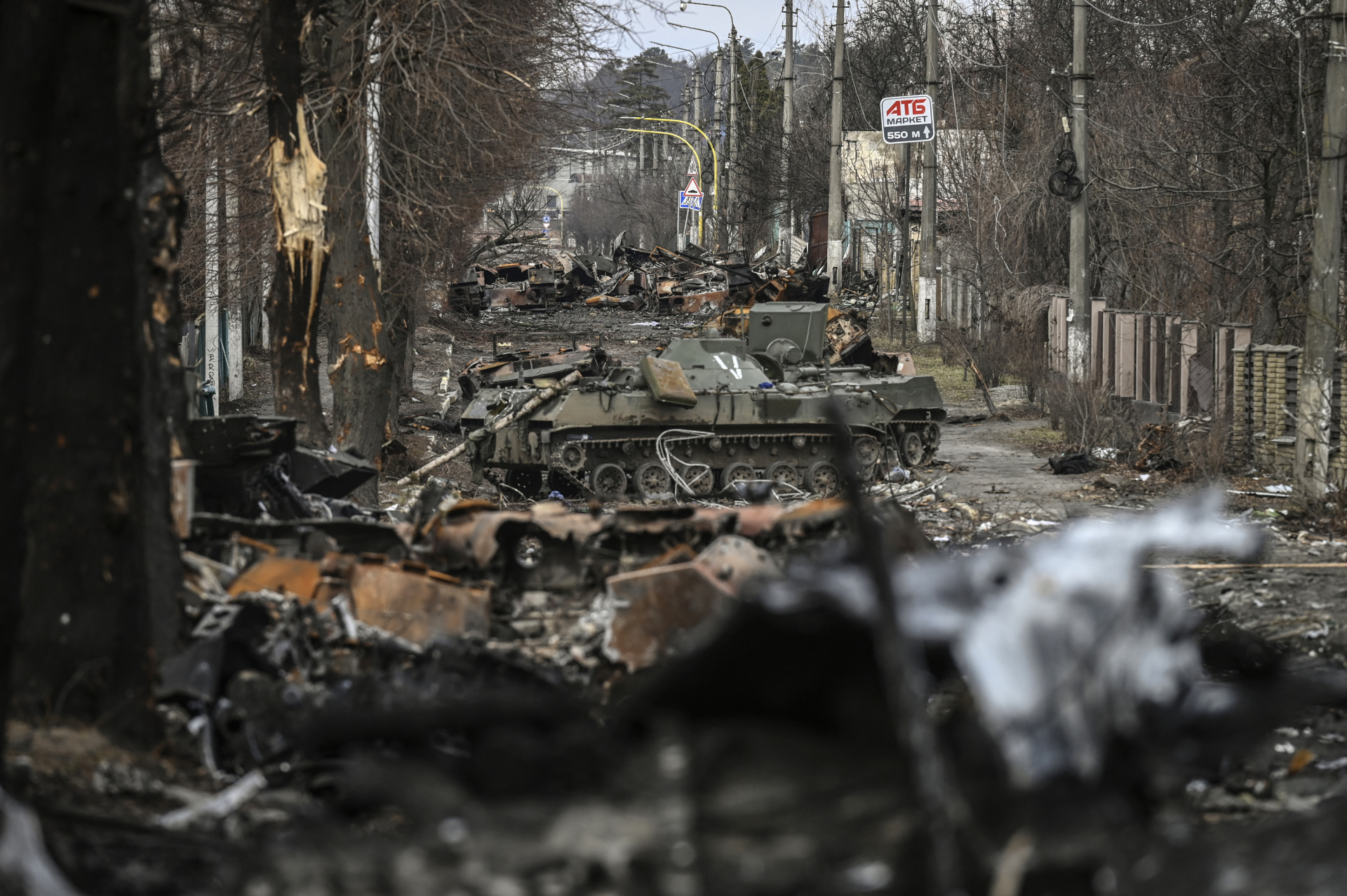 Footage of two men handling a mannequin is circulating in social media posts that claim it shows a "prop" passed off as a dead body in the Ukrainian town of Bucha, where dozens of corpses were discovered in April after Russian forces retreated. In fact, the video -- viewed hundreds of thousands of times -- was not filmed in Bucha. It was recorded for a Russian TV drama in Vsevolozhsk near Saint Petersburg on March 20, 2022.

"The video shows the Ukrainian army preparing a prop for a staged shooting," reads a simplified Chinese post on April 7 on Weibo, China's Twitter-like platform. 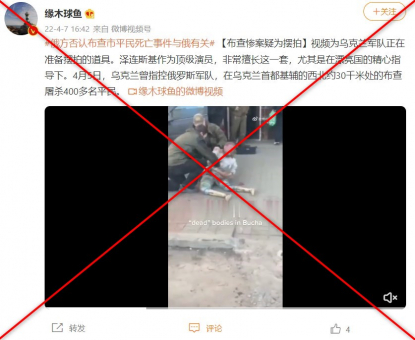 Screenshot of a Weibo post sharing the false claim, taken on April 28, 2022

An AFP team were the first journalists to discover the horrors of Bucha, a quiet commuter town near Kyiv occupied by the Russian army for over a month.

Russian troops are accused of massacring hundreds of civilians there, shocking the world and prompting allegations of war crimes.

The footage was viewed more than 370,000 times in similar posts here and here, and spread in various languages such as French and Spanish.

Reverse image searches on Google have found the original video posted on TikTok on March 29 by Russian actor Philippe Fedortchouk.

The Russian-language post reads: "Preparing a mannequin for a fall scene".

Below is a screenshot comparison of the video shared in false posts (left) and on TikTok (right). 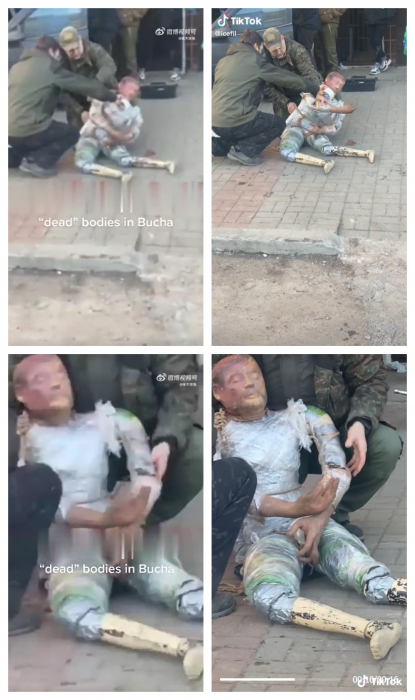 Fedorchouk told AFP he filmed the video on March 20 on the set of a TV series in Vsevolozhsk, a town near Saint Petersburg.

He shared the metadata from the original video, which shows the footage was filmed on an iPhone 11 Pro Max on March 20 at 5:43 pm Moscow time.

The GPS coordinates in the metadata show the footage was shot in Vsevolozhsk.

Maria Nistryanu, a crew member for the TV drama, said staff were preparing the mannequin for a scene in which a character fatally falls from a building and lands on a parked car in the street.

"You can see our stunt coordinator and his assistant preparing the mannequin. They're wrapping it in tape to prevent it from being damaged during the fall," she told AFP.

She said the mannequin was then covered in animal organs and dressed in clothing to make the deadly fall more realistic.

AFP has seen a production schedule for the TV series -- whose name has not yet been revealed publicly -- which shows the fall scene planned for March 20.

Nadezhda Kolobaeva, the series' first assistant director, posted photos and videos of the scene being filmed on Facebook on April 8.

She said the production team had nicknamed the mannequin "Albertik".

"For those of us who miss Albertik. The stunt coordinator Alexandre Ouvarov, the main hero (after Albertik)," she wrote in the Russian post.

A screenshot, taken on April 28, of the behind-the-scenes photos and videos.

Buildings visible in a photo shared on Kolobaeva's Facebook page correspond to Google Street View images of 8/9 Leningradskaya, in Vsevolozhsk.

Nistryanu said that "Albertik" had become somewhat of a celebrity among film crews in the region.

"He belongs to our stunt team, who use him quite a lot for various scenes, especially explosions, falls or dangerous scenes," she told AFP.

AFP has debunked a wave of misinformation around the Ukraine conflict.