The dancers in these videos are not robots

Two videos have been viewed hundreds of times after they circulated in multiple Facebook posts that claim they show lifelike robot dancers made in China performing at Shanghai Disneyland. The claims are false; both videos feature human dancers. One video shows Chinese ballroom dancers while the other shows American dancers performing an Indian classical dance.

One video was shared on Facebook here by a user in Singapore on August 10, 2020.

The  post's caption reads: “Terrific dancing.....they are not human dance artistes but robots made in China. The performance time is only 5 minutes in Shanghai Disneyland(Price 499 Yuan).”

The four-minute, 49-second video, which shows a man in evening wear and a woman dressed in a flowing silvery dress dancing, has been watched more than 460 times. 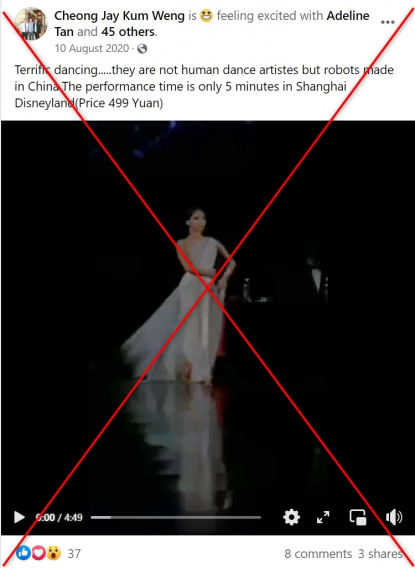 The same video has been watched more than 280 times after it was also shared with a similar claim in English here and here, in Malaysian here and in Indonesian here.

Another video, which shows two women dancing in blue and gold saris, was shared on Facebook here on March 6, 2022.

The three-minute, 20-second video has a caption that partly reads: "* Watch the dance carefully *, a classical dance performed in China at Disneyland in Shanghai. Both of them are not dancers. * These are two Chinese made robots." 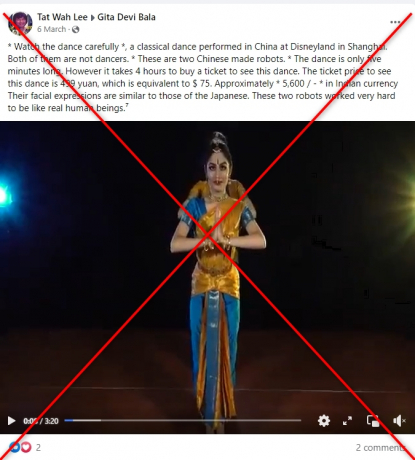 The video has garnered more than 190 views after it was shared along a similar claim here, here and here.

Another video, which shows the same dance performance but was taken from a different angle, was posted here on Bilibili, another Chinese video-sharing platform, on September 9, 2020.

According to this article, published by Chinese culture and sports company Ganglong Dance on December 13, 2019, the last performance of Xu and Shi was at the finals of the China Ballroom Dance Federation (CBDF) competition in 2019.

The annual event was held at Shenzhen's Luohu Gymnasium from December 11 to December 15, 2019, as reported by local English-language newspaper Shenzhen Daily here.

Below is a screenshot comparison of the video in the misleading post (L) and the genuine video on Xigua (R):

A reverse image search found the second video was published on YouTube here by IndianRaga, a US-based group teaching traditional Indian music and dance, on August 11, 2017.

The description states the performers are Sophia Salingaros and Isha Parupudi.

Both Salingaros and Parupudi are Indian classical dancers based in the US.

Below is a screenshot comparison of the video in the misleading post (L) and the genuine India Raga footage (R):

The Shanghai Disneyland website makes no mention of robot dancers in its listed attractions or entertainment options, and a keyword search failed to produce any result.