This video shows dancers on a UK television talent show

A video has been viewed thousands of times in multiple posts on Facebook, Twitter and YouTube alongside a claim it shows a performance by robot dancers at Shanghai Disneyland. The claim is false; the video actually shows a 2013 performance from competitors in BBC talent show Strictly Come Dancing.

The video was published here on Facebook on September 16, 2020. 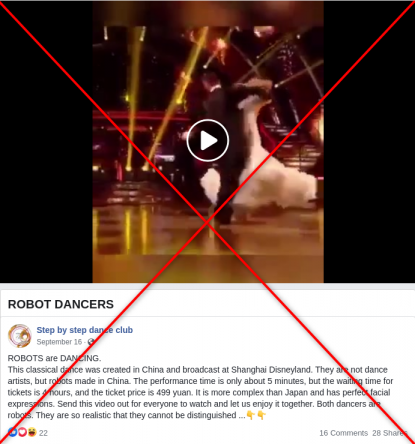 The caption reads: “ROBOTS are DANCING. This classical dance was created in China and broadcast at Shanghai Disneyland. They are not dance artists, but robots made in China. The performance time is only about 5 minutes, but the waiting time for tickets is 4 hours, and the ticket price is 499 yuan. It is more complex than Japan and has perfect facial expressions. Send this video out for everyone to watch and let us enjoy it together. Both dancers are robots. They are so realistic that they cannot be distinguished …”

Shanghai Disneyland refers to the Shanghai Disney Resort, a theme park which is a joint venture between US-based conglomerate, The Walt Disney Company and Chinese state-run company, Shanghai Shendi (Group).

A reverse image search using keyframes generated using digital verification tool InVID-WeVerify, followed by a keyword search on YouTube, found the same video published on the BBC’s official YouTube channel on December 7, 2013. The video shows the BBC One watermark in the top left-hand corner of the video.

Abbey Clancy is a British model and TV presenter. Aljaz Skorjanec is a professional dancer from Slovenia.

Strictly Come Dancing is a popular UK television programme in which celebrities are paired with professional dancers as part of a dance competition.

Clancy and Skorjanec performed the Viennese waltz to Tom Jones’ Delilah in the quarter final week of the series in 2013. It was aired on December 7, 2013.

This video shows dancing robots that were recently put on show in China.

A similar misleading claim has cropped up multiple times but has previously been linked to different videos, as debunked by fact checkers here and here.