Video of object hitting Moon was created by digital artist

A video of a massive object seeming to hit the Moon has been shared on Facebook and has been viewed millions of times on TikTok. But the clip was digitally altered by a content creator who makes "sci-fi" videos with a visual effects tool.

"Everyone been so focused on Wiil & Jada, Ukraine & Russia. That we missed the event of what happened to the moon on March 4th, 2022. Don't believe Google it. The question is what the hell is the government up to??," says an April 11, 2022 Facebook post featuring the video, which includes a side-by-side of a view of the sky labeled "Texas" and "California."

"I'm pretty sure this wasn't NO ACCIDENT," the post adds. 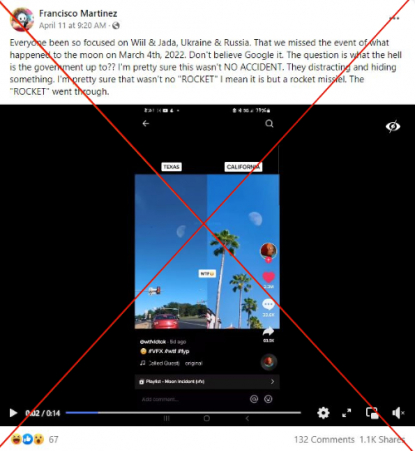 The clip posted on Facebook is a recording of a TikTok video, which has been viewed more than 75 million times. The caption on TikTok mentions "VFX" for "visual effects," but other people later reshared it without that reference, with one saying it showed an unidentified flying object crashing into the Moon.

Through a search for the keyword "Moon" on TikTok, AFP found the original two clips in separate posts on Greg Pietrantonio's channel.

Pietrantonio, who works for a recruitment marketing agency in the greater Boston area, told AFP he created the two videos featured in the posts with Adobe After Effects -- a tool used for motion graphics and visual effects.

"It is a hobby of mine that I started just for fun, then soon picked up a sizable following on TikTok," he said. "I was inspired by Kris Straub, a VFX artist known for his Local 58 channel on YouTube" who creates horror and science fiction content.

AFP previously debunked various animations falsely passed off as real on social media, including of a purported space collision, a hurricane in Oman and a new species of coral discovered in the Galapagos Islands.