Social media posts feature an image of a tweet calling for the abolition of all social programs in Canada that appears to be from the account of prime minister candidate Pierre Poilievre. But there is no evidence that Poilievre sent the tweet, which seems to be an altered version of one he posted about inflation, and his campaign says it is "fake."

"Here's a simple idea: Abolish all social programs," says a screenshot of the alleged tweet from Poilievre that was shared by Occupy Calgary in an April 5, 2022 Facebook post. 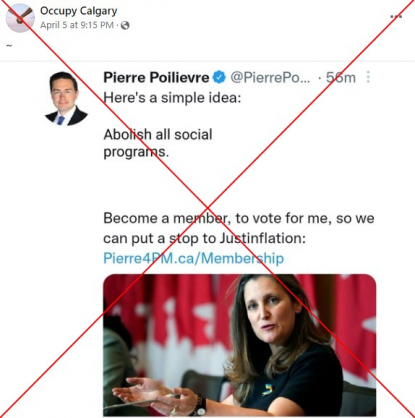 The tweet was shared elsewhere on Facebook and on Twitter in early April as the member of parliament from Carleton in Ontario province traveled across Canada to drum up support for his bid to lead the Conservative Party.

While Poilievre regularly tweets about policies he wants to enact if elected prime minister, a search of his verified Twitter account showed no evidence of the tweet about abolishing social programs.

Similarly, the tweet is not found by searching the available archived versions of his account from March 24 or April 9.

While it is possible the tweet could have been sent and then deleted, a spokesperson for the Poilievre campaign told AFP in an April 14 email: "The tweet you referenced is an obvious fake."

It is also visually similar to a tweet Poilievre sent on April 5. It begins: "Here's a simple idea," and finishes with a link to his campaign website. It also includes a photo of Canada's Finance Minister Chrystia Freeland and references "Justinflation," which the MP frequently tweets to link Canada's rising inflation to Liberal Prime Minister Justin Trudeau. Screenshot of a tweet by Pierre Poilievre taken on April 14, 2022 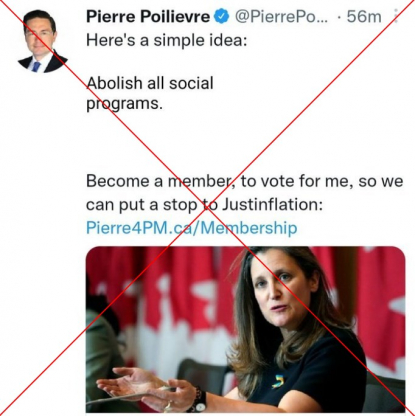