This video shows Indonesian students protesting in 2019, not 2022

A video has been watched tens of thousands of times in Facebook and Twitter posts alongside a claim that it shows students protesting in the western Indonesian city of Palembang in April 2022. But while hundreds of students recently protested in Palembang against rumoured plans to postpone the next Indonesian elections, the video has been shared in a false context. The clip has circulated online since 2019 in posts about students protesting in Palembang against changes in the country's anti-corruption law.

The post's caption reads: "Ahead of PEOPLE POWER 11/4/22 RIOT IN PALEMBANG, today UNIVERSITY STUDENTS STAGE A PROTEST AT THE Regional Legislative Council BUILDING, repulse the POLICE. God Is Great". 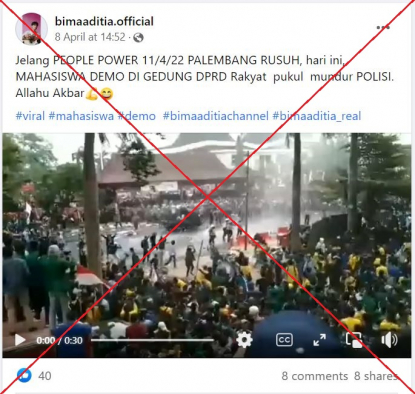 On April 7, 2022, hundreds of university students in Palembang, the capital of Indonesia's South Sumatra province, staged a rally to oppose rumoured plans to postpone the 2024 elections and to extend the president's term limit.

It was part of a series of students' protests held across Indonesia in the past few days, including in Makassar, South Sulawesi province, and Cirebon, West Java province.

On April 10, 2022, a day before thousands of students staged a protest in Indonesia's capital Jakarta, President Joko Widodo announced that the elections would be held as scheduled on February 14, 2024, in a bid to quash speculations that he would stay in office beyond the two-term legal limit.

However, the claim about the video is false.

A reverse image search on Yandex, followed by keyword searches on Google, found a longer video was posted on YouTube on September 24, 2019.

The video's caption reads: "DEMONSTRATION in front of the South Sumatra Representative Council office in Palembang 24/09/2019. This joint student protest was horrifying, attacking the police."

Below is a screenshot comparison of the footage in the misleading post (L) and the 2019 YouTube video (R):

The footage was also posted by the Instagram account of the Indonesian police's mobile brigade unit, on the same date.

The video was also published by local media Tribunnews on September 24, 2019, on YouTube here.

According to the video's caption, the protesters demanded, among others, the government revoke the revision of the Corruption Eradication Commission Law, which critics said would weaken the Indonesian anti-graft agency.