A video has been viewed tens of thousands of times after it was shared alongside a claim that it shows Pakistani lawmakers fighting in the national assembly in April 2022, delaying a no-confidence vote against Prime Minister Imran Khan. The video was shared days before his eventual removal from office. However, the claim is false. The footage in fact shows a scuffle between members of the Sindh provincial assembly, in southeastern Pakistan, in March 2021.

The 42-second video, which has been viewed more than 17,000 times, shows a group of people scuffling, shoving and pulling, in a big room.

The tweet reads: "A Brawl has broken out in the Pakistan National Assembly. 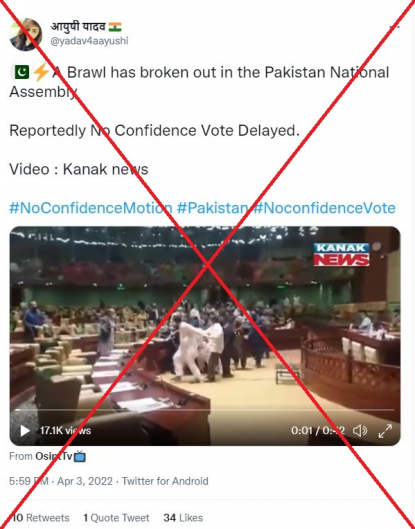 Pakistan's national assembly, is located in Islamabad, the country's capital.

On April 3, 2022, the national assembly was set to debate a no-confidence motion against Prime Minister Imran Khan, which looked certain to succeed, but the deputy speaker — a Khan loyalist — refused to accept it, causing uproar in the chamber, AFP reported here.

At first, Khan could foil the lawmakers' attempt to boot him from office by getting the president to dissolve the national assembly on the same day and called for fresh elections.

However, the country's Supreme Court deemed his actions illegal and he was dismissed from office after losing a no-confidence vote on April 10, 2022.

Shehbaz Sharif, previously the leader of the opposition, was elected prime minister the following day.

The video has been viewed more than 36,000 times after it was shared alongside a similar claim on Twitter here and here, as well as on Facebook here and here.

However, the video was shared in a false context.

Keywood searches on Google found a longer version of the video here was posted on March 4, 2021, on the YouTube channel of Kanak News, an Indian regional news channel.

The title of the video reads: “Kick Punches Between Leaders In Pakistan's Sindh Assembly."

Both the footage in the misleading posts and the genuione video bears the logo and watermark of Kanak News.

Below is a screenshot comparison of the video in the misleading post (L) and the Kanak News footage (R):

Foootage of the incident in the assembly of Sindh province, in the southeastern part of Pakistan, was also aired by Pakistani broadcasters Geo News and Ary News on March 2, 2021.

According to Pakistan's largest English-language newspaper Dawn, the fight broke out between members of Khan's Tehreek-e-Insaf (PTI) and the opposition Pakistan Peoples Party (PPP).

PTI alleged three of its Sindh assembly members had been "kidnapped" by the PPP after those lawmakers had defected to the opposition.

The interiors seen in the video also corresponds with a Google image of the Sindh provincial assembly, which can be seen below: 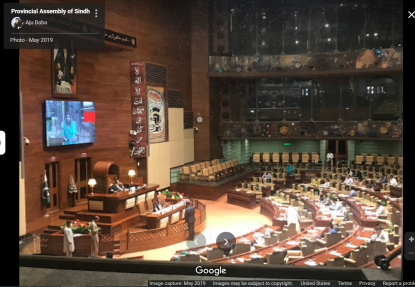 Screenshot of a Google image of the Sindh provincial assembly

There were no media reports of fights or scuffles in the Pakistani national assembly during debates about Khan's dismissal.