As Pakistan's now-ousted leader Imran Khan faced what he claimed to be a US-backed campaign to remove him from power, social media posts shared thousands of times purported to show a photo of a pro-Khan, anti-US protest in Turkey. In fact, the photo was taken in 2017, when thousands marched against the detention of a Turkish opposition politician. A picture of Khan's face was doctored onto a sign that actually read "Freedom for jailed MPs".

"After Russia, there were demonstrations in Turkey against the American regime change," reads an Urdu-language tweet from April 6 shared more than 2,900 times.

A photo apparently showing protesters in Russia rallying in support of Khan and against the United States circulated widely ahead of a no-confidence vote that ousted the cricketer-turned-politician from power on April 10. However, the photo turned out to be doctored.

The tweet adds: "US President Joe Biden had earlier released a video in support of opposition parties for regime change in Turkey, to which Turkey reacted strongly."

Biden caused a stir during his presidential campaign by telling The New York Times that the United States should embolden rivals to defeat the "autocrat" Erdogan.

The tweet purports to show a photo of demonstrators raising Turkish and Pakistani flags and an image of Khan. 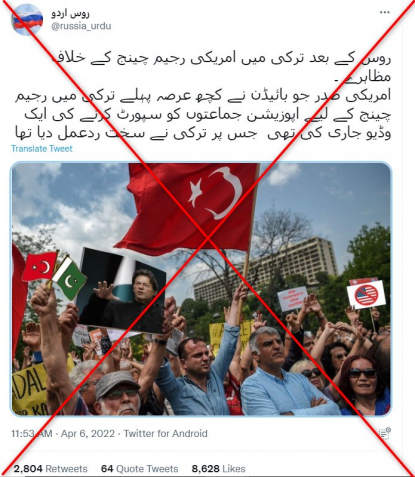 Screenshot of the doctored image, taken on April 7, 2022

Muslim-majority countries Pakistan and Turkey have been aligned on key foreign policy issues, particularly under the leadership of Khan and Turkish President Recep Tayyip Erdogan.

Khan insisted his opponents colluded with the United States to bring about "regime change", which Washington denies.

However, the image has been doctored from an AFP photo taken on June 15, 2017 at a protest in Istanbul.

Thousands of supporters joined a nearly 500-kilometre march from Ankara to Istanbul to protest the jailing of prominent journalist-turned-lawmaker Enis Berberoglu, who was handed a 25-year sentence for leaking classified information to a newspaper.

Berberoglu regained his seat in parliament in February 2021 after his jail term was reduced. 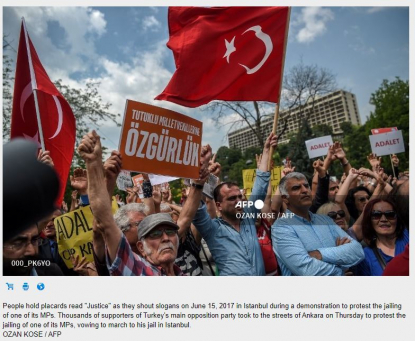 Screenshot of the original AFP photo, taken on April 11, 2022

Below is a screenshot comparing the doctored photo (left) with the original in AFP's archives (right).

The photo was edited to add Khan's face onto a red sign reading "Freedom for jailed MPs", and flags representing Turkey, Pakistan and anti-US sentiment.

AFP debunked a wave of false claims in the lead-up to the no-confidence vote against Khan, including doctored footage that appeared to show his image displayed on the Burj Khalifa and posts misrepresenting his remarks about India's army.