An image has been shared thousands of times in social media posts alongside a claim it shows an anti-US protest staged in Russia in support of embattled Pakistan Prime Minister Imran Khan. The posts circulated online after Khan accused Washington of trying to remove him from power, which it denies. But the image has been doctored. The original photo -- captured by the Associated Press news agency -- shows a 2021 protest in the Russian capital Moscow against the detention of Kremlin critic Alexei Navalny.

The image shows a protest in Moscow at which one demonstrator appears to be holding a photo of Khan with Russian President Vladimir Putin.

Other placards shown in the image appear to read "Stop interfering in the affairs of other countries" and "No for American interface [sic]".

The post's Urdu-language caption translates to English as: "Demonstrations in Moscow today against US intervention in other countries, in which some people also carried posters of Imran Khan and Russian President Vladimir Putin.

"According to independent sources, the demonstration was organised at the behest of the [Russian] government.” 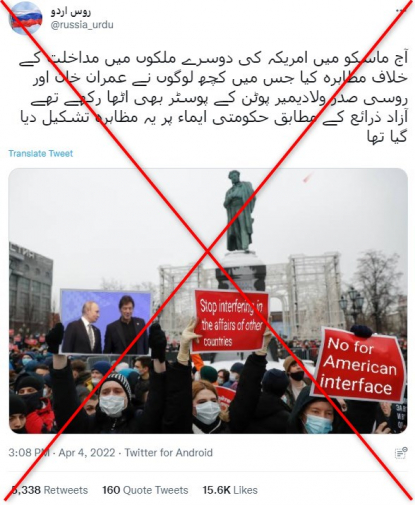 Screenshot of post with the doctored image. Taken on April 5, 2022.

As of April 6, 2022, there have been no official reports of an anti-US protest in Russia at which demonstrators showed support for Khan.

The post circulated online as the cricketer-turned-politician sidestepped a no-confidence vote that could have seen him booted from office by dissolving parliament and calling a snap election, AFP reported.

Khan has insisted he has evidence -- which he has declined to disclose publicly -- of Washington's involvement, although local media have reported it was merely a briefing letter from Pakistan's ambassador following a meeting with a senior US official.

Western powers want him removed because he won't stand with them on global issues against Russia and China, Khan has said.

But the image has been doctored.

A reverse image search found the original photo was published by the Associated Press news agency here about a protest staged on January 23, 2021 in support of jailed Kremlin critic Alexei Navalny.

The photo in the misleading posts was doctored to digitally replace Navalny's portrait with an image of Khan and Putin. The text on the placards was also manipulated to replace Russian-language statements with anti-US messages.

"People gather during a protest against the jailing of opposition leader Alexei Navalny in Pushkin square at the statue of Alexander Pushkin in the background in Moscow, Russia, Saturday, Jan. 23, 2021," the AP report reads.

"Protesters hold posters reading 'Freedom for Navalny!' and 'One for all and all for one' with Navalny's portrait."

Below is a screenshot comparison of the doctored photo (left) and the original from AP (right):

The AP image was also used in reports by Politico and the Indian finance portal Money Control.

Navalny, Putin's most vocal domestic critic, was arrested in January 2021 after he returned to Russia following months of treatment in Germany for a nerve agent poisoning he blames on the Kremlin, AFP reported in July 2021.

In the lead-up to Khan's shock decision to dissolve Pakistan's parliament, AFP has debunked false posts claiming footage of him was displayed on the Burj Khalifa and that he praised India's army at a rally in March.