Skip to main content
Pakistan's Prime Minister Imran Khan arrives at the National Stadium, known as the Bird's Nest, in Beijing, for the opening ceremony of the Beijing 2022 Winter Olympic Games on February 4, 2022. ( POOL / CARL COURT)

As Pakistan Prime Minister Imran Khan faces a no-confidence vote that could force him from power, social media posts and news reports have circulated online claiming to share a direct quote from a speech he delivered on March 20. These posts claim Khan praised the army of arch-rival India and said, "India's army is not corrupt and they never interfere in civilian government". But a review of his speech found that while Khan praised India's foreign policy, he did not issue the remarks indicated in the posts.

The purported quote was shared on Twitter here on March 20.

It reads in part: "'India's foreign Policy is better than #Pakistan, they work for their people, India's army is not corrupt and they never interfere in Civilian govt': Pakistan PM Imran Khan". 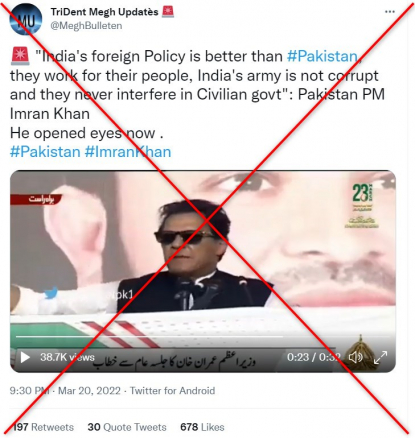 The post features a video -- viewed more than 38,000 times -- showing a portion of a speech Khan delivered on March 20 in Dargai town west of the capital Islamabad.

Khan has been holding rallies in recent weeks to shore up support before a no-confidence vote that could see him removed from office. It is the most serious domestic challenge to his rule since the former cricket star came to power in 2018.

Hindu-majority India and Muslim Pakistan have fought three wars since independence from British colonial rule in 1947, two of them over the disputed territory of Kashmir, AFP reported.

Their shared border has a heavy military presence on both sides, and there have been numerous flare-ups between them, with tensions sometimes raising fears of an atomic exchange.

However, a review of the clipping featured in the posts found Khan made no such remarks.

In the clipping, Khan could be heard saying in Urdu, "The country next to us, India. I give India praise for this, they've always kept a free foreign policy. Today, India is with them. They have an alliance. In QUAD, India is allied with the US, but calls itself neutral. They're importing oil from Russia despite sanctions."

"QUAD" refers to an alliance between the United States, India, Australia and Japan designed to counter China's forceful push across the Asia-Pacific region.

The clip in the misleading posts corresponds to the 30-minute 18-second mark of the full speech.

An AFP review found that nowhere in the full speech does Khan issue the quote shared in the misleading posts.

Besides his reference to India's foreign policy, Khan makes no other mention of India in the remainder of the speech.

Below is a screenshot comparison of the clip shared in misleading posts (left) and the full speech broadcast by PTV (right).

Screenshot comparison of the clip shared in misleading posts (L) and the full speech broadcast by PTV (R).