As Indonesia was hosting its first motorcycle Grand Prix (MotoGP) in more than two decades in March 2022, a video purporting to show professional racer Marc Marquez dancing to popular Indonesian music at the event was viewed millions of times on social media. However, the claim is false. The video was taken when Marquez visited a performing arts theatre in Indonesia in February 2019. Footage from that visit shows the six-time MotoGP champion dancing to a version of the song "Despacito".

The video's Indonesian-language title translates to English as, "Marc Marquez dances to dangdut during the Mandalika MotoGP in Indonesia". 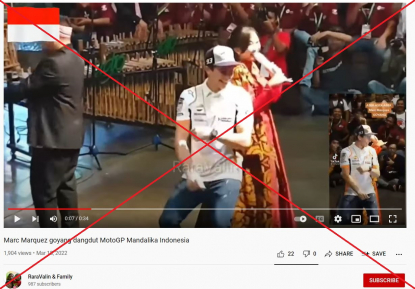 The video circulated as Indonesia hosted its first MotoGP in 25 years. The event was held at the newly built Mandalika International Street Circuit, in the country's West Nusa Tenggara province, from  March 18 to March 20, 2022.

Marquez was in Indonesia to compete at the MotoGP but ended up pulling out from the race after a crash in a warm-up session ruled him out.

The Spanish racer tweeted: "I'm OK after the big crash I had this morning. For precaution, and to not take any more risks, we decided to not race at the #IndonesianGP."

The video purporting to show Marquez dancing at the Grand Prix was viewed more than 10 million times in similar posts on Facebook here and here; on TikTok here, here and here; and on Instagram here.

However,  the video has been shared in a false context.

A Google reverse-image search and keyword searches found this video posted to YouTube on February 12, 2019.

The eight-minute video, which was taken from a slightly different angle, shows Marquez dancing to "Despacito", a Latin-American pop hit.

"Angklung" refers to Indonesia's traditional musical instrument made of bamboo.

Below is a screenshot comparison of the misleading video (L) and the genuine YouTube video (R): 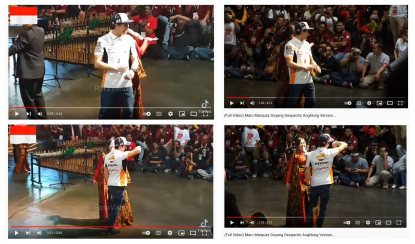 A video of the performance was also uploaded by the Indonesian state-run Antara news agency to YouTube here on February 10, 2019.

According to descriptions of both genuine footage and Antara's clip, Marquez sang and danced with performers during a visit to Saung Angklung Udjo, a performing arts theatre in the Indonesian city of Bandung, on February 10, 2019.

Marquez's visit to Saung Angklung Udjo was also reported by several other local news outlets, for example here and here, on the same day.

According to the reports, Marquez -- who races for the Repsol Honda team -- visited the theatre with Indonesian representatives of the Japanese automobile manufacturer Honda, which had been promoting cultural programmes for the preservation of local musical instruments.