Skip to main content
Manny Pacquiao speaks during a campaign stop ahead of the May 9 presidential election, in suburban Manila on February 16, 2022. ( AFP / TED ALJIBE)

A video has been viewed hundreds of thousands of times on Facebook and YouTube alongside a claim Filipino boxing legend and presidential hopeful Manny Pacquiao "tearfully asked for the forgiveness" of Ferdinand Marcos Jr, his rival for the top job. The posts circulated online as Pacquiao said he would strengthen the government agency tasked with recovering the fraudulently-acquired wealth of Marcos Jr's late dictator father. However, Pacquiao's team refuted the posts and told AFP he did not apologise to Marcos Jr. The video shared in the posts do not show Pacquiao making a tearful apology.

"BBM pummels Pacquiao who tearfully asked for his forgiveness," reads the caption to the video shared on Facebook on March 13.

"BBM" are the popular initials for Marcos Jr, the favourite to win the presidential election in May in which he has teamed up with the outgoing president's daughter Sara Duterte.

Boxer-turned-senator Pacquiao is also going for the top job. 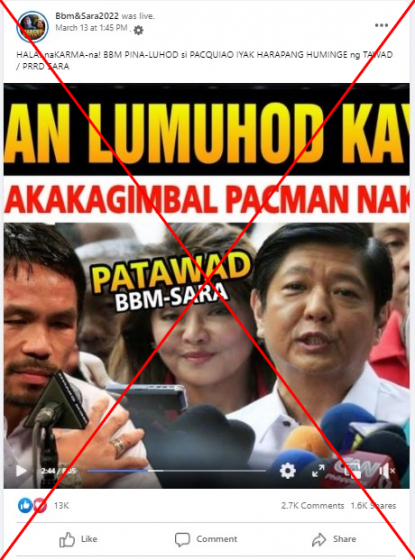 The same video was viewed another 250,000 times in similar posts on YouTube and Facebook here and here.

The posts circulated online after Pacquiao vowed he would strengthen the Presidential Commission on Good Government once elected president. The agency is tasked with recovering the ill-gotten wealth of the Marcos family.

A World Bank report estimates the late dictator plundered up to $10 billion from government coffers.

The Marcos family still faces dozens of pending cases of fraud and embezzlement.

"You really should say sorry to BBM, who's very kind. We, BBM and Sara supporters, are the ones who are mad at you, Manny", one person commented.

"That’s right, Manny. Ask for forgiveness and I hope you just cooperate [with us]", another wrote.

"This is false. Senator Pacquiao [did] not apologize to Bongbong Marcos," a representative for Pacquiao's campaign team told AFP on March 24, referring to Marcos Jr by his nickname.

A review of the eight-minute video featured in the posts found it does not show Pacquiao tearfully apologising to Marcos Jr.

The news segments reported on an agreement with the United States to develop the Philippines's nuclear energy programme; a rundown of the presidential candidates' activities, including Marcos Jr's and Pacquiao's separate visits to northern provinces; and a campaign rally held by Vice President Leni Robredo.

Below are screenshot comparisons of the misleading video (left) and the corresponding news segments from Bombo Radyo Philippines (right).

The remaining portion of the video was taken from a clip of Mike Abe, a commentator for local media organisation SMNI News.

Abe's commentary references Pacquiao's earlier remarks that "the dumbest people" in the Philippines "are those who will vote for a thief". Pacquiao did not name the politician he was alluding to.

While Abe said Pacquiao should say sorry to Marcos Jr supporters for his remarks, nowhere in the clip did the commentator say Pacquiao had tearfully apologised to his rival.