Skip to main content
Anti-Marcos demonstrators display placards with portraits of Philippines' former first lady Imelda Marcos during a protest in front of the anti-graft court in Manila on November 13, 2018 ( AFP / Ted ALJIBE)


After a court dismissed a graft case against former Philippine dictator Ferdinand Marcos, social media posts claimed the decision proved that all accusations he committed large-scale fraud were "fabricated". The posts are misleading; the Philippine Supreme Court thrice ruled that he committed large-scale fraud, while Marcos and his heirs face dozens more pending court cases.

"Big news now that the mainstream media does not want to report," reads the title of this YouTube video viewed more than 38,000 times since it was posted July 16.

In the video, the YouTuber claims: "The Marcoses have been acquitted again after several decades. For your information... a lot of cases have been filed by the yellows against the Marcoses. But all the cases they filed... are fabricated. There is really no evidence."

"Yellows" is a reference to political rivals of Marcos, who served as president from 1965 until 1986, when his dictatorship ended in the bloodless "People Power" revolt.

Marcos oversaw widespread human rights abuses during his 20-year rule. Thousands of people were killed, tortured or imprisoned, according to rights advocates and previous Philippine governments.

He has also been accused of siphoning off billions of dollars from state coffers during his rule. 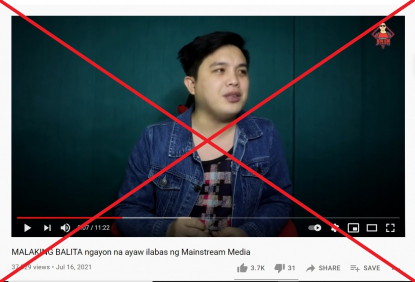 A screenshot of the misleading post taken on July 23, 2021

The same video was shared in Facebook posts here and here.

The post circulated after an anti-graft court dismissed a case filed by the Philippine government against Marcos, his heirs and certain associates, citing a lack of evidence.

Some social media users appear to have been misled by the video's claims.

"Finally, the truth came out that all cases against the Marcoses are all lies," one person commented.

"I'm grateful that they already cleared the Marcos name from decades of lies," another wrote.

Despite the recent case dismissal, the Marcos family still faces 88 pending cases of fraud and embezzlement, the head of the legal department of the Presidential Commission on Good Government (PCGG) -- the agency tasked with recovering Marcos's ill-gotten wealth -- told AFP on July 27.

Various news outlets reported on the anti-graft court decision, including here, here and here, contrary to the claim in the misleading posts.

Moreover, charges against Marcos and his heirs are not "fabricated", as the misleading posts claim.

The Philippine Supreme Court ruled multiple times that he accumulated wealth fraudulently during his presidency.

In separate decisions in 2003, 2012 and 2017, the high court ruled that Marcos and his heirs must return millions stolen from the country.

The 2003 decision reads in part: "We believe petitioner was able to establish the prima facie presumption that the assets and properties acquired by the Marcoses were manifestly and patently disproportionate to their aggregate salaries as public officials."

The assets "should be considered ill-gotten wealth and forfeited in favor of the State," the court ruled.

In addition, Marcos' widow Imelda was found guilty of graft in 2018.