Skip to main content
An elderly woman gets her blood tested during a drive to provide medical check-ups for hypertension, cholesterol and diabetes at an integrated services post in Banda Aceh on December 15, 2021 ( AFP / Chaideer Mahyuddin)

An advertisement on Facebook targets diabetes patients by saying they could control their blood sugar by purchasing a magnetic ring -- a medical breakthrough that would dramatically ease their lives. But experts say the product has not been shown to be effective against the disease, nor has it been approved by US regulators. 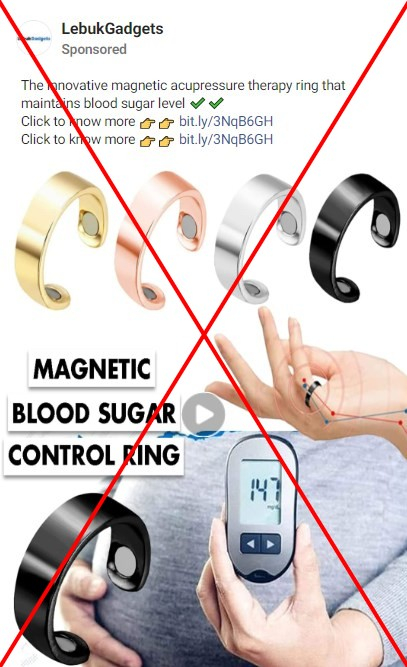 The ad includes a video that claims the ring controls blood sugar through "therapeutic static magnets that stimulate the pancreas," and links to two pages selling the rings for $24.95.

About one in 10 Americans suffer from diabetes, the US Centers for Disease Control and Prevention (CDC) says. Americans pay substantially higher prices than people in other countries for insulin, a hormone that helps blood sugar enter the body's cells. Those with the disease either do not respond well to it or no longer make it at all.

In late March, the US House of Representatives passed a bill that would cap the monthly cost of insulin. The Senate is holding its own negotiations on driving down insulin costs.

Alternative treatments may seem appealing to those currently struggling with rising insulin prices, but the US Food and Drug Administration (FDA) has for years warned people to be wary of those that are marketed illegally. "Without proper disease management, people with diabetes are at a greater risk for developing serious health complications," the agency's website says.

The magnetic blood sugar control rings advertised on Facebook are "not something that's been approved by the FDA," said Sudipa Sarkar, director of inpatient diabetes management service at Johns Hopkins Medical Center.

"I am not aware of any evidence or way in which a ring like this could actually help people control their blood glucose. It's unfortunate that claims like this are out there and it distracts people from far more effective evidence-based treatments. Talking with a healthcare professional about a treatment plan for you should be your first step in controlling your blood glucose," Gabbay said.

Matthew Freeby, assistant professor of medicine at the David Geffen School of Medicine at UCLA and director of the Gonda (Goldschmied) Diabetes Center, agreed, saying: "To my knowledge, there is no data suggesting benefit with the use of magnetic rings or bracelets."

Other fact checks by AFP on health-related topics can be found here.