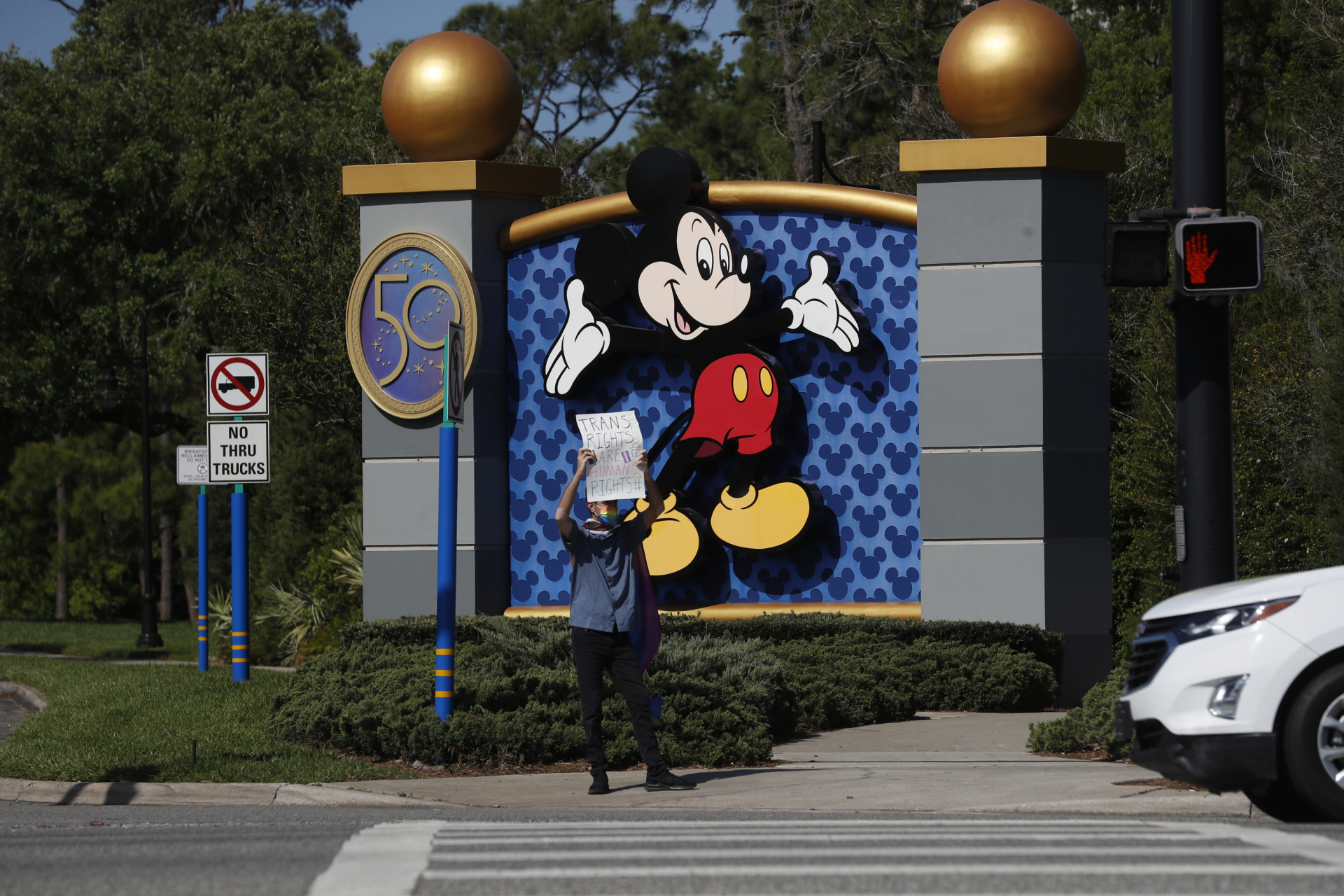 Social media posts claim Disney's stock price dropped more than 70 percent as the company faces a backlash over its opposition to Florida's controversial law banning lessons on sexual orientation and gender identity in elementary schools. But Disney's stock has not fallen by that amount, and some of the claims are tied to an article from a satirical website.

"Disney's stock has plummeted more than 70 percent and attendance is down more than 50 percent. 9.1 million people canceled their subscriptions to Disney Plus, and local landfills report a massive influx of discarded Star Wars and Marvel toys," says an April 13, 2022 Facebook post.

The post includes a screenshot showing the headline of an article that says: "After Devastating Losses, Disney CEO Admits Company Made 'A Huge Mistake' Going Woke." The story's text mirrors the claim in the post about fallout for the media-entertainment giant. 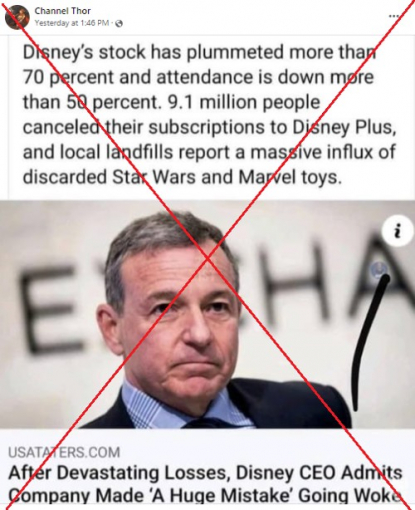 The Walt Disney Company is facing boycott calls over its stance opposing the Florida law, which critics have branded "Don't Say Gay." Disney's position, the result of an employee push, has pitted one of Florida's largest employers against local conservatives and Republican Governor Ron DeSantis in a culture war battle over sexual and gender education.

The law was signed by DeSantis on March 28, and stipulates that "a school district may not encourage classroom discussion about sexual orientation or gender identity in primary grade levels."

A similar claim is circulating in screenshots of a since-deleted tweet from Robert Hyde, a Republican Senate candidate, which said Disney's stock price fell 70 percent and included the hashtag "#Groomers," an epithet that conservatives use for those who oppose the law.

But Disney's stock price has not dropped 70 percent. It was just over $130 at the close of trading on April 14, and has been on a downward trend for more than a year from a high of $197 in March 2021. This decline has been tied to various difficulties that predate the controversy over the Florida law including pandemic-related downturns in the sectors in which the media-entertainment titan operates.

The posts and article also claim that 9.1 million people canceled their Disney+ subscriptions without indicating a source for the figures. At the time of the posts, Disney's most recent quarterly report published on February 9, 2022 showed the company gained 11.8 million new subscribers on its streaming platform during the first fiscal quarter to bring the total to nearly 130 million worldwide.

The same applies to Disney theme park attendance, which the posts and article claimed is down 50 percent but without specifying any context. The February report showed revenues for "Disney Parks, Experiences and Products" doubled from a pandemic-hit period a year earlier to $7.2 billion in the most recent quarter. The May 11 update showed a slight decline on a quarter-to-quarter basis to $6.7 billion.

Contacted by AFP, Disney did not comment on the claims.

The article included as a screenshot in some posts making the 70 percent stock drop claim was published on USA TATERS, a website that is part of a network of parody sites started by Christopher Blair.

"Everything on this website is fiction," says a disclaimer on the "About Us" page. Although the article does not include a publishing date, the webpage's source code shows it was created on April 8.

The article's author, Flagg Eagleton-Patriot, is one of the several aliases used by Blair.

Contrary to the claim in the article, Disney's CEO -- who is Bob Chapek, not Joe Barron, as the story states -- has said that the company's response to the Florida law was insufficient.

"I understand our original approach, no matter how well intended, didn't quite get the job done," Chapek said at the annual shareholder meeting on March 9.