A Facebook post claiming to show footage of Russian fighter jets shot down over Ukraine has been viewed more than one million times. However, the post is the latest in a wave of misinformation around the conflict and actually shows computer-generated images made with video game ARMA 3.

"Watching Russian-made fighter jets shot down one after another is like watching leaves fall from a tree, thanks to the US-made shoulder-fired FIM-92 Stinger," reads a Burmese-language Facebook post from March 23.

"The Americans didn't shoot down the jets themselves, but the Ukrainian army, which was trained by the US, fired away."

The footage, viewed more than one million times, appears to show soldiers firing on fighter jets.

The United States has announced hundreds of millions of dollars in military aid to Ukraine, including Stinger missiles. 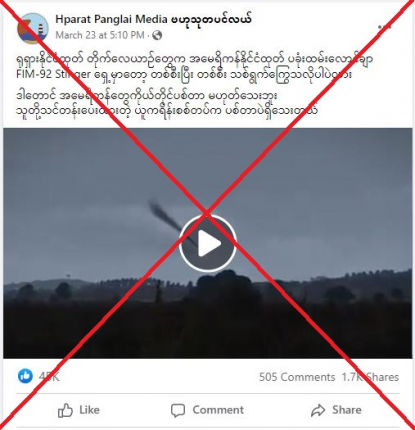 The video was shared in similar Facebook posts here, here, and here.

While the Ukrainian military says it has downed Russian planes in the deadly conflict, the video actually shows computer-generated footage taken from a video game.

Keyword searches on Google found the same footage posted on YouTube on March 16, 2022, in a video that mentions war-themed video game ARMA 3.

Below is a screenshot comparison of the video in false posts (left) and the YouTube video (right). 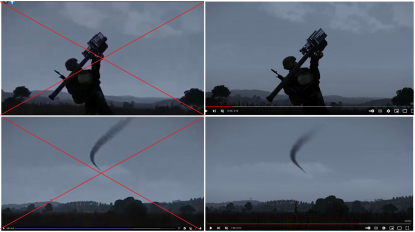 The game's developer Bohemia Interactive said the video circulating in posts about Ukraine was taken from ARMA 3.

"The video was indeed made from a modded Arma game and does not show reality," spokesman Pavel Křižka told AFP on March 31.

The company warned about misinformation involving the video game in a tweet on February 25.