Skip to main content
A Ukrainian serviceman examines a crater caused by a Russian missile strike in the northern part of Kyiv region, on March 28, 2022 ( AFP / Anatolii Stepanov)

CNN did not report that Ukraine war is causing myocarditis

Social media posts claim that American news channel CNN reported that Russia's invasion of Ukraine is causing cases of myocarditis, or inflammation of the heart. But the posts feature an altered image from a satire website with comments suggesting it was true, and the media company said the apparent newscast is a fake. 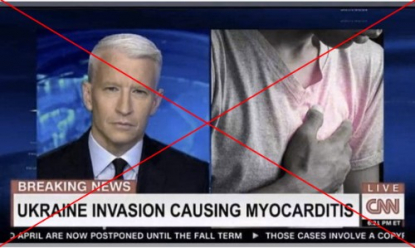 One user responded to the tweet asking if it was a joke, and the poster replied: "No they are willing to put anything but the real cause."

Myocarditis has been documented as a rare side effect of Covid-19 vaccines which has previously been subject to misinformation. According to the US Centers for Disease Control and Prevention, the benefits of the shots outweigh risks, and patients with Covid-19 are at much higher risk for myocarditis compared with patients who do not have the disease.

A Google reverse image search of the picture leads to this article on the Babylon Bee, a satirical website. Posted on March 7, the parody story is headlined: "Media Says Spike In Myocarditis May Be Linked To Ukraine Crisis" and features the newscast photo with Cooper.

The Babylon Bee describes itself as "the world's best satire site, totally inerrant in all its truth claims. We write satire about Christian stuff, political stuff, and everyday life."

This is not the first time AFP has found articles from the Bee circulating in posts claiming them to be true.

CNN spokesman Jonathan Hawkins also said no such segment aired on the cable network. "Confirming that this is indeed fake," he said.

The image of Cooper used in the story appears to originate from a 2016 CNN broadcast.