Skip to main content
A Taliban fighter mans a machine gun on top of a vehicle as they patrol a street in Kabul on August 16, 2021 ( AFP / Wakil Kohsar)

Social media posts feature an image of an apparent CNN report lauding the Taliban for wearing masks to protect against Covid-19 during their offensive in Afghanistan. But the claim comes from a satirical article, CNN confirmed it is not real, and the background photo was taken in Pakistan in 2007.

The image shows a news banner with a CNN logo that says "TALIBAN FIGHTERS RESPONSIBLY WEARING MASKS" in front of a photo of a group of armed men.  It was posted on Facebook on August 15, 2021, as Taliban insurgents took control of Afghanistan.

"This is no joke, CNN praised Taliban fighters for proper garb during a pandemic," the post says. 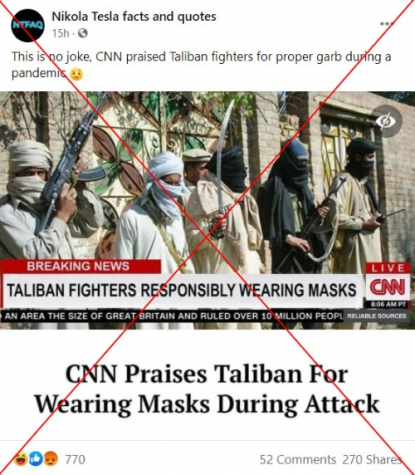 A user commented on another Facebook post: "The nimrod CNN again praise the evil people. Deport them out of this country."

Several posts attribute the Taliban claim to The Babylon Bee, a website that describes itself as "the world’s best satire site, totally inerrant in all its truth claims. We write satire about Christian stuff, political stuff, and everyday life."

The website published an article headlined "CNN Praises Taliban For Wearing Masks During Attack" on August 14. It included the image of the news banner and the armed men shared in the social media posts.

Using a reverse image search, AFP determined that the photo of the armed men was published in 2007 by Reuters, and pictures pro-Taliban militants in Pakistan.

CNN spokesperson Bridget Leininger told AFP that the CNN news banner pictured in the posts is "doctored and not real."

A surge in Covid-19 cases, driven by the Delta variant, has reignited political controversy over mask-wearing in the United States.

In Afghanistan, the US-backed government collapsed and Islamist Taliban insurgents took control of the country after two decades of war.

AFP has debunked other satirical content that social media users took as fact here and here.