No, the video was originally uploaded as satire by a Greece-based Facebook user

A video that appears to show a radio-frequency identification (RFID) tracking chip in a face mask was published by a New Zealand-based Facebook user alongside a claim that masks made in China “often contain RFID chips”. The claim, however, is false; the video was originally uploaded as satire by a Greece-based Facebook user who inserted the chip into the face mask as a joke.

The video has been shared over 380 times since it was published on Facebook here on February 27, 2021. 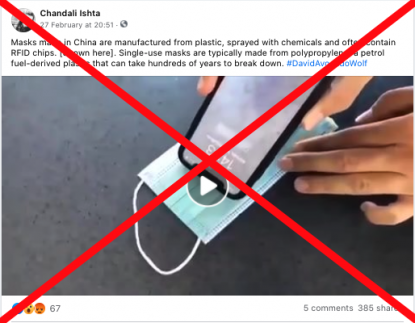 The video appears to show a cell phone receiving a notification for location tracking from an RFID chip that is inside a face mask.

The Facebook post’s caption reads: "Masks made in China are manufactured from plastic, sprayed with chemicals and often contain RFID chips."

The video was also published alongside similar claims on Facebook here, here, here and here.

The video, however, is satirical.

The clip was first published on Facebook here in September 2020 by a Greece-based user.

The post’s Greek caption translates in English as: “Of course this is trolling! The chip is a common NFC that we put on the mask for the video… Obviously the need for conspiracy theories is greater than logic.”

Near Field Communication (NFC) chips allow electronic devices within a small radius to communicate with each other. The technology is commonly used in cards and phones for contactless payments.

The New Zealand Ministry of Health told AFP in a March 12 email it “has not received reports of face masks made in China containing RFID or NFC chips”.