Skip to main content
Dark smoke and flames rise from a fire following an air strike in the western Ukrainian city of Lviv, on March 26, 2022 ( AFP / Ronaldo Schemidt)

A screenshot of CNN footage has been shared on social media alongside the claim that the channel falsified coverage of a fire in Ukraine, with the name "Edmonton" on a firefighter's jacket cited as evidence. But the footage shows the aftermath of strikes in the city of Lviv, and the jacket was donated by a Canadian non-profit, the organization and Edmonton Fire Rescue Services say.

"Things are getting so bad in Ukraine that Edmonton firefighters are on the scene," says text in an image featured in a March 27, 2022 Facebook post, adding: "CNN you never fail to deliver...comedy that is."

A screenshot of CNN footage appears below the text with the firefighter's jacket circled in blue. 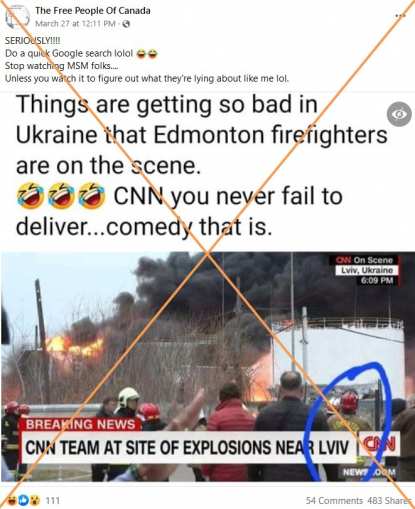 Other posts sharing the same screenshot have circulated on Twitter since March 27. 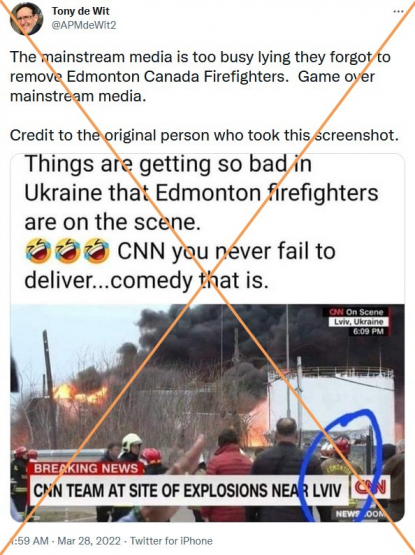 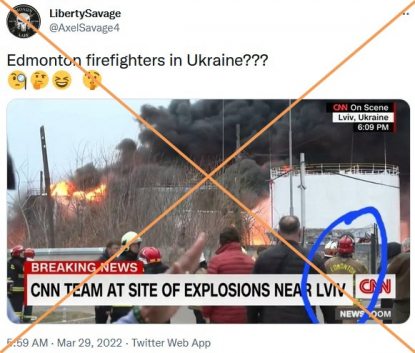 On March 26, at least five people were wounded in Russian strikes that damaged infrastructure including a fuel storage facility in the western Ukrainian city of Lviv.

Up to that point, it had been largely untouched by Moscow's invasion, making it a key hub for people fleeing cities that have been under fierce Russian shelling for several weeks, such as Kharkiv in eastern Ukraine.

CNN anchor Don Lemon was at the scene and an excerpt of the "Newsroom" broadcast in which he appears alongside the firefighter was posted on Twitter by one of his colleagues, Nora Neus.

One of the firefighters in the picture does wear a jacket that says "Edmonton," but the claim that this indicates the scene was not filmed in Ukraine is inaccurate.

Its founder, Kevin Royle, told AFP that equipment was sent earlier in March to Ukrainian cities including Lviv.

"Each one of those shipments would have equipment just like the firefighter PPE (personal protective equipment) in the CNN broadcast," he said.

Most of the identifying markings of the gear are usually removed, but the large volume of donations has complicated the volunteers' work.

"There is actually two sets of bunker gear from Edmonton in the footage, and if you look at the one without 'Edmonton' on it, you can see the outline from where the panel would have been stitched to the jacket," he said. 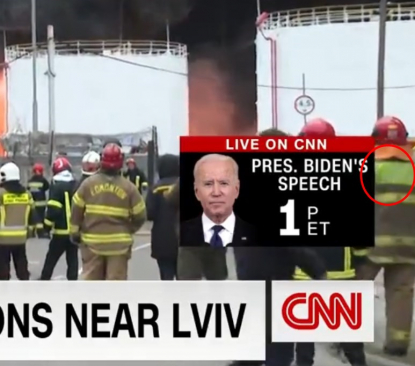 The origin of the equipment was confirmed by Brittany Eveneshen, a spokeswoman for Edmonton Fire Rescue Services.

"The gear in the CNN footage was donated by Edmonton Fire Rescue Services," she said, also confirming that the footage was not filmed in her city as "there have been no fuel factory fires here in Edmonton."

Several Firefighter Aid Ukraine deliveries have taken place in recent years, including in 2016 and 2019, according to Eveneshen, who credited the outpouring of support to the fact that a large Ukrainian community lives in the city of Edmonton, capital of the western Canadian province of Alberta.

"When the war broke out in Ukraine, our community rallied together," she said.

"Together with community donations, local hospital donations and fire service donations, Firefighter Aid Ukraine was able to collect more than 14 tonnes of donated gear including medical and hospital equipment, firefighter gear, hygiene supplies and other life rescue materials," which was then shipped to Ukraine on March 10.

AFP geolocated the place where the fire broke out in Lviv to confirm that the event took place in Ukraine, as shown below: 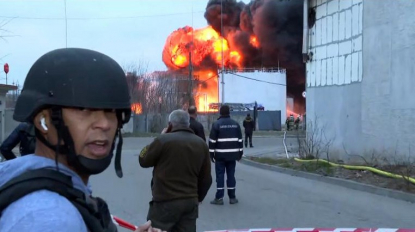 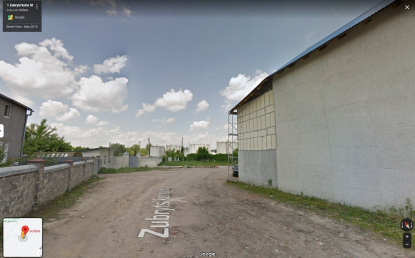 The aftermath of the strikes featured in the CNN footage is also visible in AFP pictures taken in Lviv on March 26. 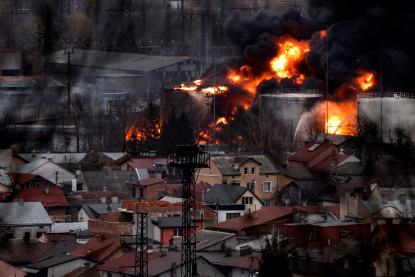 Dark smoke and flames rise from a fire following an air strike in the western Ukrainian city of Lviv, on March 26, 2022 ( AFP / Ronaldo Schemidt)

AFP reported that the strikes sent plumes of thick smoke over the city center, and Lviv residents observed the dark clouds billowing and growing larger in gusts of wind.

AFP Fact Check has debunked other inaccurate claims about the war in Ukraine here.