This photo shows firefighters in Australia, not Ukraine

A photo of firefighters covered in soot has been shared thousands of times in social media posts that claim it shows Ukrainian firemen working to "save lives" after the Russian invasion. Although Ukraine's firefighters have been working at the sites of Russian air strikes since Moscow began bombarding Ukrainian cities, the image actually shows firefighters in Australia.

"#Ukraine #firefighters save lives by risking their own lives. #Heroes about whom little said. thank you for your service and courage! It's priceless #GloryToUkraine," reads a screenshot shared on Facebook on March 22, 2022.

The image shows three soot-covered firefighters in a vehicle.

The claim circulated online as Russia's invasion of Ukraine forced an estimated 10 million people to flee their homes.

Ukrainian firefighters have been filmed working at the scene of Russian air strikes since the invasion, AFP reported here and here.

The image has been shared alongside a similar claim here, here, and here.

The photo was also shared by Volodymyr Zelensky's former press secretary, Iuliia Mendel, in a tweet captioned "Ukrainian firefighters", sparking further false claims that the conflict in Ukraine is staged or fake. It was retweeted more than 2,000 times before it was deleted.

However, the photo was actually taken in Australia years before Russia invaded Ukraine.

Google reverse image and keyword searches found the photo in news reports from February 2019 about a series of devastating fires in the southern Australian state of Tasmania, including here, here, and here.

The news reports credit the photo to a Facebook post shared by Australian band The Wolfe Brothers on February 1, 2019.

"If you are unaware currently in Tasmania there is some seriously bad Bush Fires. Nearly 3 percent of the state has been destroyed. A friend sent us this photo.. LOOK at these incredible men, they look like they have been in a war zone!" the post reads.

It says the photo was taken by "another brave firefighter John Lyons". 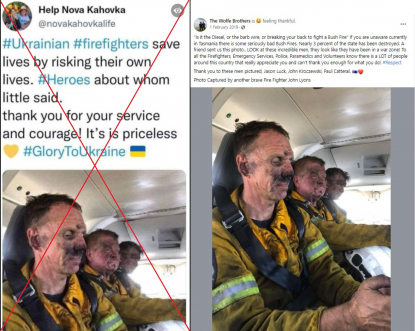 Comparison of the picture shared in misleading posts (L) and the photo uploaded by The Wolfe Brothers (R) in February 2019.

Bushfires ripped through parts of Tasmania between December 2018 and March 2019, burning 200,000 hectares of land, equivalent to 2.9 per cent of the state's land area.

In a radio interview in March 2022 with Australian broadcaster ABC, Tom Wolfe of The Wolfe Brothers said the image was being shared in a misleading context.

"When we posted that in 2019, it was the fires. We posted that purely out of respect and thanks for what people were doing because our farm was covered in smoke and we knew people who were losing properties," he said.

"It's been used in all different bizarre places. It's been used in some TV montages for the fires in New South Wales," Wolfe said, referring to the deadly bush fire season of 2019-2020, which became known around the world as the Black Summer bushfires.

AFP previously debunked social media posts in Spanish that falsely claimed the photo showed firefighters tackling blazes on the US west coast in 2020.