Clip of man in body bag smoking is from the set of a music video, not ‘staged’ deaths in Ukraine

A TikTok video of a man smoking a cigarette in what appears to be a truck full of body bags has been viewed thousands of times in Facebook posts suggesting that deaths are being staged in the war in Ukraine. The claim is false; the clip shows the behind-the-scenes making of a music video for a song released by Russian rapper Husky in September 2020.

This Facebook page with more than 27,000 followers shared a video of body bags inside an orange truck on March 15, 2022. In the video, a man appears to be smoking a cigarette while lying in a body bag.

The same video has been shared in several other languages including Spanish and Chinese.

The posts suggest that the clip is from the war between Russia and Ukraine that has killed hundreds of people and displaced about 10 million.

But the video is unrelated to events in Ukraine; it shows the film set for a rap music video.

Using the online tool WeVerify, AFP Fact Check ran reverse image searches on keyframes from the clip and discovered the same scene in a TikTok post by Vasya Ivanov, a Moscow-based art director. The video was published on March 28, 2021; one year before Russian President Vladimir Putin launched a full-scale ground invasion and air assault in Ukraine.

The caption of the TikTok clip, written in Russia, translates to “Shooting the Husky video - ' Never ever'.”

Ivanov’s profile links to his Vimeo account, which has the video clip of the song “Never Ever” by Russian rapper Husky, real name Dmitry Nikolayevich Kuznetsov, released on September 26, 2020. According to the description, the video shows a janitor who cleans up after gang fights. The scene is supposed to portray the “internal struggles of an artist who is cleaning up his mental world”.

One of the final scenes shows the same clip of an orange truck full of black body bags as seen in the video circulating on Facebook. 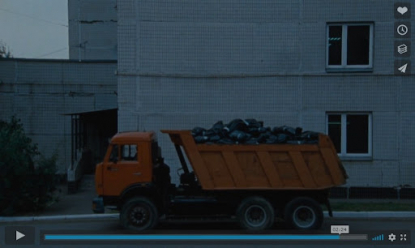 A screenshot of the video on Vimeo for “Never Ever” by Russian rapper Husky, taken on March 22, 2022

Additionally, on Ivanov’s Instagram, some behind-the-scenes clips were shared as stories and saved in the highlights section under the name "Husky NE". The highlights include the clip shared on social media. 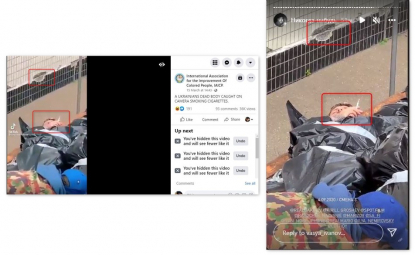 The official video for the song includes a list of credits at the end, where Ivanov's name appears as production designer.

This is not the first time the video has been used to spread misinformation. In 2021, amid the conspiracy theories surrounding Covid-19, posts claimed that the recording showed the staging of people killed by the coronavirus. AFP debunked the claim here.