This footage shows a military exercise in the Netherlands in 2018

A video of military helicopters hoisting tanks into the air has been viewed millions of times in Facebook posts that claim it shows a Russian attack on a military base in Ukraine. The clip circulated as Russia intensified attacks in Ukraine. However, the footage actually shows a military exercise in the Netherlands in 2018.

The seven-minute video shows military helicopters carrying tanks and was viewed more than seven million times before it was removed. 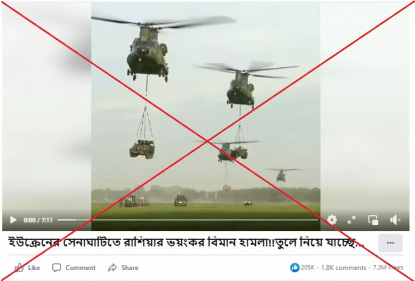 Russia has stepped up attacks in Ukraine, unleashing deadly strikes on a string of cities including the capital Kyiv.

The video was also shared in similar Facebook posts here, here and here .

A reverse image search found the seven-minute video posted on YouTube on August 5, 2019 by a military fan account called "Military Archive" that credited it to the Dutch ministry of defence.

The video's description says it shows a Dutch military drill called "Exercise Falcon Autumn 2018", which was held between September 17 and October 13, 2018.

Below is a comparison of keyframes from the video in misleading Facebook posts (left) and the YouTube video from 2019 (right):

A keyword search for "Falcon Autumn 2018" found a shorter video posted on the Facebook page of the Royal Netherlands Air Force on October 12, 2018, which features various keyframes from the footage.

The same video was published in an article about the exercise on the Dutch defense ministry's website.

Below is a comparison of the video from misleading posts (left) and the video on the Dutch defense ministry's website (right).

Contacted by AFP, a spokesperson from the Dutch Ministry of Defence said that the seven-minute video circulating in misleading posts was "made by the ministry".

AFP has debunked a wave of social media posts presenting old videos as footage of the Ukraine conflict, including here, here and here.