Skip to main content
A Ukrainian soldier hugs his wife in the city of Irpin, north of Kyiv, on March 10, 2022 ( AFP / Aris Messinis)

Social media posts claim a video featuring a man in military uniform tearfully embracing a woman and a baby depicts a Ukrainian soldier heading to war. But the clip shows the 2018 homecoming of an American Marine who met his son for the first time.

"Ukraine soldiers going to war emotional," says text above a video shared on Instagram on February 27, 2022 that has been liked more than 8,500 times. 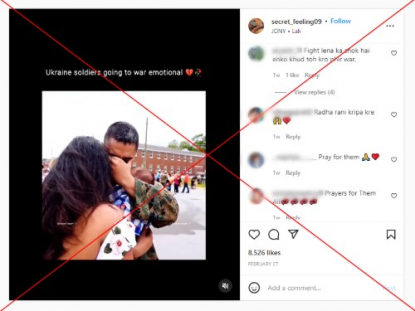 Ukrainian men between the ages of 18 and 60 were banned from leaving the country to help the fight against invading Russian forces, separating many families as women and children evacuate.

But a reverse image search for a screenshot of the clip circulating on social media led to this video, in which "US Marines" is visible on the man's uniform. Searching YouTube for "US Marine meeting baby" leads to this three-minute video from August 2018.

The video, which shows the same couple as the social media posts, depicts US Marine Corporal Brandon Crespo returning home to North Carolina following a six-month deployment and meeting his infant son, Noah, for the first time, according to the title and subsequent news coverage. His wife, Francis Crespo, posted the video with the caption: "Such a magical day."

The couple appeared on The Ellen Show later that year to tell their story.