Facebook posts shared hundreds of times purport to show a photo of a Ukrainian tank in Iraq. They accuse Ukraine of hypocrisy for condemning Russia's invasion, despite apparently having played a role in the Iraq War. In fact, the tank photo has been doctored to add a Ukrainian flag and coat of arms. While Ukrainian troops did serve in Iraq, the photo resembles images of American troops at the Iraq-Kuwait border during the Gulf War.

"In the photo, a Ukrainian tank is seen during Iraq invasion," reads a Bengali-language post shared on February 26 on a Facebook page with more than 75,000 followers.

"While expressing sympathy for the innocent people of Ukraine, I have to say, 'Hey Europeans, look at the colour of your own blood'."

The image appears to show soldiers and a tank with the Ukrainian flag and coat of arms next to a mural of toppled dictator Saddam Hussein. 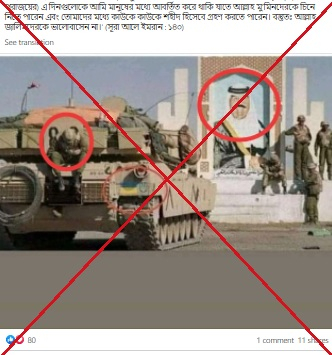 The image was shared in similar Facebook posts, including here, here and here.

One post shared more than 800 times reads: "What goes around comes around. This photo is from 2004 in Baghdad, the capital of Iraq. In this photo, a Ukrainian tank can be seen gnashing its teeth in central Baghdad."

The United Nations estimates that more than 2.5 million people have fled Ukraine since the Russian invasion on February 24, most of them to Poland, in Europe's worst refugee crisis since World War II.

However, while Ukrainian soldiers did serve in Iraq from 2003 to 2008, the picture circulating online is doctored.

Keyword searches and reverse image searches found the original photo in an article from August 2, 2011 about the 21st anniversary of the Iraqi invasion of Kuwait.

The article, published by Arabic-language news site Al Bawaba, features the photo of the tank circulating on social media but without the Ukrainian flag or the Ukrainian coat of arms. The photo caption says it was taken in Kuwait.

Below is a screenshot comparison between the photo used in the misleading Facebook posts (left) and the news report (right):

A comparison of the picture used in the misleading post (L) and the photo used in the news article (R).

AFP found similar photos showing soldiers in front of the same mural taken during the Gulf War in 1991, more than one decade before the US invasion of Iraq in 2003.

A keyword search found photos taken on January 1, 1991 and March 1, 1991 in the archives of Getty Images photo agency.

The photo captions say they show American soldiers in front of a mural of Saddam Hussein at the Kuwait-Iraq border.

Former military officer and editor of Bangladesh Defence Journal A. R. M. Shahidul Islam said the tank in the photo circulating online was an American tank -- an M1A1 Abrams battle tank -- which US military deployed during the Gulf War.

AFP has debunked a wave of false claims about the Ukraine conflict here.