After mainland Chinese medics were sent to Hong Kong to help combat the city's worst Covid-19 outbreak to date, a video circulated in multiple social media posts alongside a claim it shows pandemic workers sleeping on the floor at a convention centre in the virus-hit city. But the video has been shared in a misleading context: it shows pandemic workers in China's eastern Shandong province. A spokesperson for Hong Kong's Hospital Authority separately told AFP it had "arranged suitable and proper accommodation for the mainland medical team".

It shows a group of people -- dressed in full personal protective equipment (PPE) -- lying on mattresses in an arena.

The post's traditional Chinese-language caption translates to English as: "Don't think the doctors and nurses who came to Hong Kong to help fight the pandemic are staying in hotels.

"They don't have comfortable beds and pillows but are sleeping on the floor in the AsiaWorld-Expo. Very touched and grateful!

"Hong Kong is in distress, but they are risking their lives, leaving behind family members and patients in mainland China. They are Hong Kong's benefactors, and this love will never be forgotten!"

Hong Kong converted the AsiaWorld–Expo -- one of the city's two major convention centres -- into a community treatment centre for patients with mild Covid symptoms following a massive surge in cases since January. 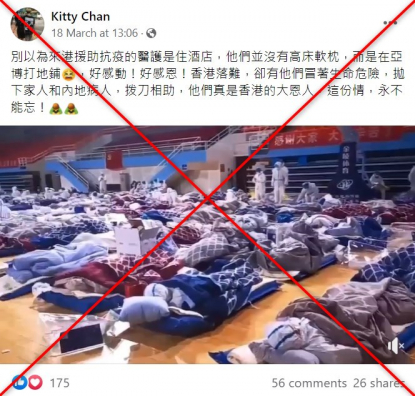 A screenshot of the misleading post taken on March 22, 2022

The outbreak -- fuelled by the highly transmissible Omicron variant -- has ravaged the city's healthcare system and left it with one of the highest Covid-19 fatality rates in the developed world, with the government facing criticism for failing to vaccinate its elderly population in time, AFP reported.

On February 24, 2022, the government invoked emergency powers to allow medical professionals from mainland China to practice in Hong Kong as part of efforts to contain the outbreak.

The move reignited a long-standing debate over foreign healthcare workers and medical accountability, as mainland medics have so far not been permitted to work in Hong Kong without passing local exams and licensing regulations.

The same video was also shared on Facebook here, here and here; and here on YouTube alongside a similar claim.

The post's simplified-Chinese caption translates to English in part as: "Salute to the warriors in white! (Author: Yi Sui Dan Xin) #Love in Weihai fights together against the pandemic#". 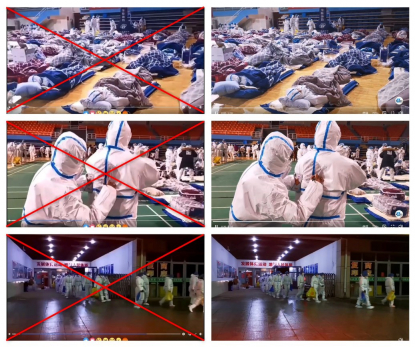 The same video was published here in a report by Chinese state media outlet The Paper on March 18, 2022.

The simplified Chinese-language headline translates to English as: "Shandong Fight Pandemic丨Stick to the front line, build a strong defence and pay tribute to the soldiers in white!"

A spokesperson for the Hospital Authority in Hong Kong told AFP the video in the misleading posts "was not filmed in Hong Kong".

"The HA has arranged suitable and proper accommodation for the mainland medical team," the spokesperson said.

Earlier, the authority also told local media it had arranged "suitable hotel accommodation and specialised transport to and from the AsiaWorld-Expo" for the mainland Chinese health workers.