Following Ukrainian President Volodymyr Zelensky's virtual meeting with US Congress, social media posts shared hundreds of times claimed he was wearing a T-shirt emblazoned with a "Nazi symbol". In fact, the symbol represents the Ukrainian military, according to an image comparison. A representative for the Ukrainian embassy in Thailand said it did not relate to Nazism.

It shows a photo of Zelensky, a TV comedian turned wartime leader, wearing a T-shirt with a cross symbol during a virtual address he gave to US Congress on March 16, in which he made a plea for help against the Russian invasion.

A second photo shows Adolf Hitler wearing a shirt with a similar emblem. 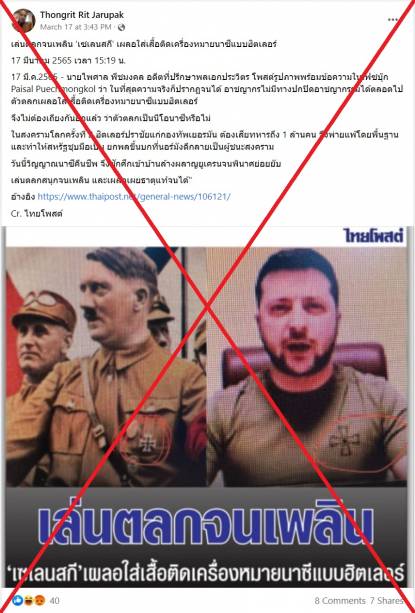 Zelensky, who is Jewish and whose family lost relatives during the Holocaust, hit back by saying the Kremlin used "Nazi terminology" in characterising its objectives in Ukraine.

A similar photo of Zelensky wearing the same T-shirt also circulated on Twitter with a similar claim.

The symbol on Zelensky's T-shirt corresponds to the symbol for Ukraine's armed forces, as seen on its official website.

The symbol of Ukraine's armed forces shown on its website

Below is a comparison of a screenshot from a BBC News report on Zelensky giving his March 16 address (left) and the symbol of Ukraine's Armed Forces (right).

Dmytro Deineko, specialist for consular and administrative issues at the Ukrainian embassy of Thailand told AFP the symbol on Zelensky's T-shirt "is the emblem of the Armed Forces of Ukraine."

"The symbol is a crimson cross with a Trident in the middle," he said. "I confirm that it has nothing to do with the symbol of Germany during the Second World War."

The Iron Cross was a Prussian military award used from 1813 and revived by Hitler in 1939.

AFP has debunked a wave of misleading claims about the Ukraine conflict.