Skip to main content
The Russian flag is seen on top of the Consulate General of the Russian Federation as members of the Ukrainian community protest on February 25, 2022 in Montreal, Quebec ( AFP / Andrej Ivanov)

Social media posts claim that the avenue outside the Russian consulate in Montreal was renamed for Ukrainian President Volodymyr Zelensky in a show of support for the country after it was invaded by Russia. This is false; the Avenue Zelensky sign pictured in the posts was installed during the filming of a satirical television program, and the city told AFP that the name of the street remains unchanged.

"The Russian consulate in Montreal is now on Avenue Zelensky," claims a March 12, 2022 Facebook post shared more than 2,500 times. It includes a picture of a street sign bearing the city of Montreal's logo on a fence near a building flying the Russian flag. 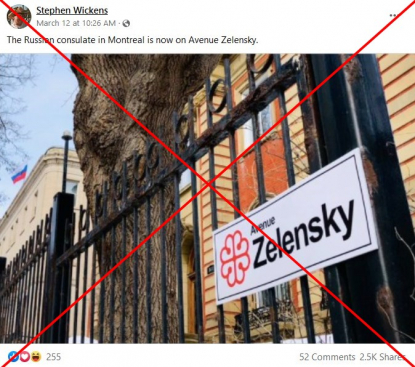 The same claim attracted more than 11,000 likes on Twitter.

A reverse image search of the photo led to the official Twitter account of Infoman, a satirical TV show about current affairs aired by public broadcaster Radio-Canada.

The show tweeted a similar image on March 10, 2022, with the caption (in French): "A beautiful moment captured." 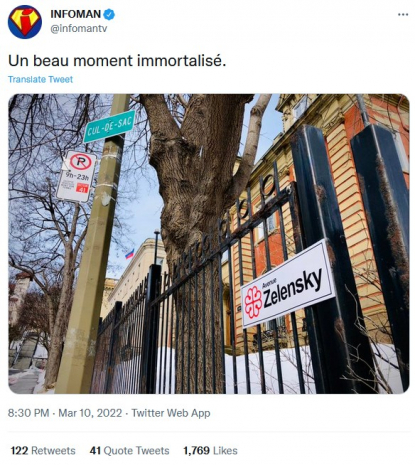 Searching for that day's edition of the broadcast on Radio-Canada's website revealed that the street sign was installed on Avenue du Musée during the filming of the show by host Jean-René Dufort.

At the 1:20 minute mark, he speaks about a bar in Jerusalem scrapping "Putin" from its name, and how a pro-Ukraine street sign appeared in the US capital.

"I thought this was an excellent idea so I did the same with the tiny piece of the Avenue du Musée where the Russian consulate in Montreal is located," he says, before placing the street sign on a fence. 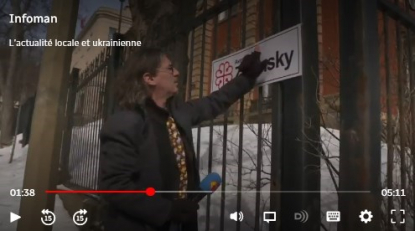 "If Valérie Plante (Montreal mayor) wants to make it official, it would be a pleasure," he says.

But the municipal government said it did not officially rename the street.

He explained that such a change would require a resolution of the city council.

While confirming that the city "strongly condemns the Russian invasion of Ukraine in violation of international law, and stands in solidarity with the Ukrainian community in Montreal," Rivest said that the street sign placed by Dufort had been removed.

AFP Fact Check has debunked multiple false and misleading claims circulating on social media since the start of the Ukraine conflict.