Screenshots of a purported court document have circulated online in Nigeria with claims that it implicates Instagram celebrity Ramon Abbas, better known as Hushpuppi, in a $400,000 money laundering scheme carried out from inside a US prison. Abbas is currently standing trial in the US where he pleaded guilty to internet fraud. However, the claim is false: the screenshots have been digitally altered using documents laying out previous charges against Abbas. US officials have also dismissed the claim.

“Ramon Abbas, also known as ‘Ray Hushpuppi’, arrested for fraud and money laundering & currently serving time in a US federal prison in California, has been caught laundering $400k worth of EIP debit cards,” reads AriseTV’s tweet. A similar claim was reported by Nigerian daily newspapers Vanguard, Leadership, and The Independent on the same day.

EIP cards are prepaid debit cards issued by the US Treasury for stimulus payments to qualifying Americans. The purported court documents shared online claim that Abbas used compromised data of US citizens to purchase 58 EIP cards, valued at $429,800 in total.

Similar claims have been circulated on blogs and by individuals in Nigeria and neighbouring African countries.

For instance, popular Nigerian activist Deji Adeyanju published the claim on his social media platforms, including on his Facebook page with more than 420,000 followers and on his Twitter account. Adeyanju simply attached an old photo of Abbas. 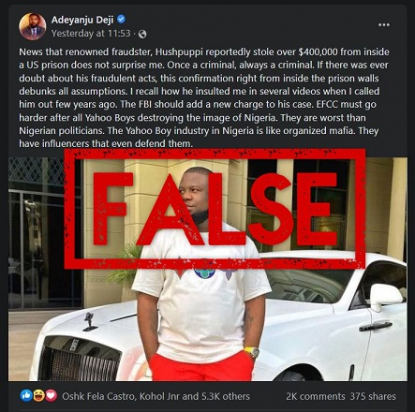 Meanwhile, a Facebook page called “Foluke Daramola” shared the claim along with seven screenshots of the supposed court document as proof. This Facebook page has previously been the subject of a debunk by AFP Fact Check.

The first four of these screenshots were shared in Arise TV’s tweet. The last screenshot features the signature of US Judge Rozella Oliver.

All the posts create the impression that Abbas conducted fraudulent activities from prison, but there is no evidence to support the claim. In fact, the documents in question were digitally manipulated from old charges.

AFP Fact Check searched the website of the US Department of Justice using the keyword “Abbas” and found no traces of the document that is currently being shared online. 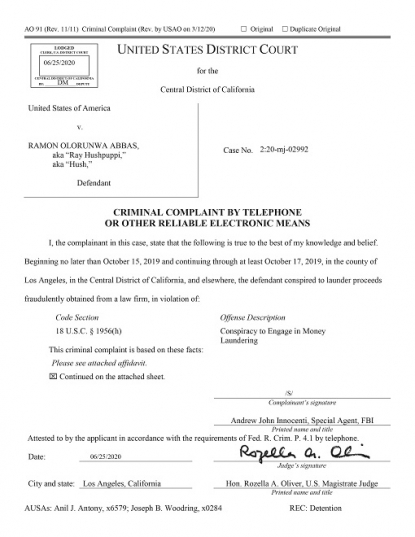 Screenshot of the 2020 charges against Abbas

By comparing the two documents, AFP Fact Check found that the version currently circulating online, which is dated March 16, 2022, was in fact created by digitally manipulating the 2020 court document.

Besides the fact that some of the paragraphs in the original charges were repeated verbatim in the supposedly fresh document, the signature of the judge of the California court was also copied.

In the purportedly new document, there are a number of inconsistencies suggesting document alterations. Broken lines are visible under the signature bar, which appears to have been placed over Judge Oliver’s signature. 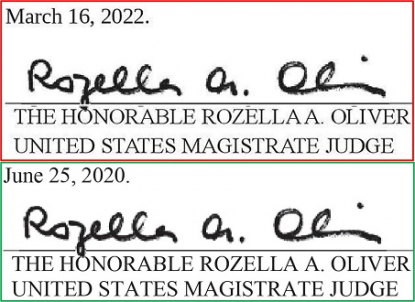 The purportedly new document claims that the FBI is investigating the identity of one “AJ” for assisting Abbas in perpetrating the supposed fraud. “We are currently working to unmask the identity of ABBAS’s accomplice ‘AJ’,” reads item 23 in the document.

However, AJ’s identity has long been revealed. AJ’s name is Yusuf Adekinka Anifowoshe, and he was arrested by FBI special agents in New York on July 22, 2021, because he “allegedly played a role in the fraud, assisting Abbas with a call to the victim,” according to the court’s statement.

Further investigation shows that the manipulated document was used to trick unsuspecting internet users into visiting a fraudulent EIP website.

The website “www.stimuluscard.com” was repeatedly quoted in the manipulated document. Website identity tool Whois.com revealed the registrant contacts as “+354.4212434”.

A search for the number returned the Google page of a cryptocurrency exchange platform in Iceland’s capital Reykjavik.

The number has been linked with internet scammers who use malware to extract people’s data.

For instance, it was cited in a 2021 malware analysis report by the US Cybersecurity and Infrastructure Security Agency which found the number linked to three files “associated with a variant of DarkSide ransomware”. 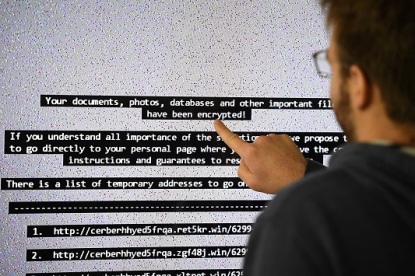 Ransomware is designed to encrypt the victim's files to extort ransom for their recovery.

In addition, the phone number was also mentioned online in multiple fraud accusations.

The US Attorney’s Office in Los Angeles has confirmed that the document is not genuine.

“The U.S. Attorney’s Office in Los Angeles, which filed the case against Mr. Abbas, has not filed any such document,” spokesman  Thom Mrozek told AFP Fact Check on March 17, 2022. “After looking at the document excerpted in recent media accounts, the document appears to have been fabricated.”

“We have checked with the FBI agent who supposedly authored the document, and he confirms it is a fake,” Mrozek added.

Abbas is awaiting sentencing in the US, where he pleaded guilty last year to money laundering and other crimes which led to a Malta bank losing  $14.7 million.

The charges against Abbas were filed by the US Attorney’s Office in Los Angeles after his extradition from Dubai in July 2020. Abbas has since been in custody and was initially due to be sentenced on February 14, 2022, but the California court delayed the ruling till July 11, 2022.

AFP Fact Check has debunked several false claims about Abbas and his ongoing legal battle in the US, including posts claiming that he had been released from custody.