Several images have been shared repeatedly in social media posts that claim they show a minaret in India's capital lit up with the colours of the Russian flag to show "support" for Moscow's invasion of Ukraine. The posts circulated online after a similar tweet was shared by the state-run Chinese tabloid Global Times. The claim is misleading: the Indian government said the building in New Delhi was illuminated as part of a week-long event to promote affordable medicines. Local media reports also said the minaret was illuminated for the pharmaceutical event, not Russia's invasion of Ukraine.

The claim was shared here on Twitter on March 8, 2022 alongside three images of the Qutb Minar building in New Delhi.

The tweet reads: "#India just lit up the Qutb Minar with the colors of the #Russian flag
To support #PutinHitler against #Ukraine". 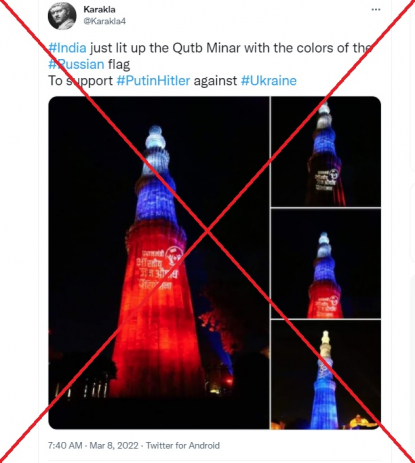 A screenshot of the misleading post taken on March 17, 2022.

The post features four images of the UNESCO recognised minaret south of India's capital illuminated in red, white and blue.

Russia's invasion of Ukraine has left India's traditional balancing act between Moscow and the West looking wobblier than ever, with experts saying New Delhi has few good diplomatic options.

Following the invasion, India abstained on a UN Security Council resolution deploring Russia's "aggression" against Ukraine, winning praise from Moscow for its "independent and balanced position".

"India lit up the Qutb Minar, one of the landmark buildings in New Delhi, with the colors of the Russian flag," reads the Global Times post shared on Twitter on March 7.

The post was retweeted more than 60 times before it was deleted.

The government's press information bureau said in a statement posted on Twitter on March 8 that the stunt was staged as part of an annual pharmaceutical event, and it was not related to the Ukraine conflict.

"[Global Times] has claimed in a tweet that Qutub Minar was lit up with the colours of the Russian flag. This claim is misleading," the tweet reads.

"Qutub Minar was illuminated as a part of the #JanaushadhiDiwas2022 celebrations."

"Janaushadhi Diwas 2022" refers to a week-long event staged in early March "to spread the awareness of quality generic medicines", according to this press release from India's Ministry of Chemicals.

The Indian government posted similar images of the illuminated Qutub Minar here and here with no reference to Russia's invasion of Ukraine.

Below is a comparison of one of the images posted by Global Times (L) and the government's Twitter handle (R): 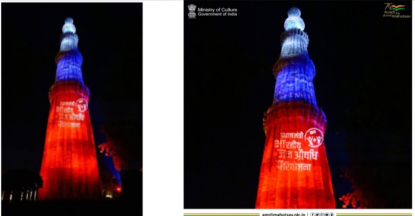 Local media reports -- including from Nine News and APB Live -- said the event was staged to create awareness of "generic medicines".

AFP has previously debunked the most viral misinformation circulating in the wake of the Ukraine crisis here.