Skip to main content
A resident receives a dose of the Pfizer Covid-19 vaccine in Melbourne. ( AFP / WILLIAM WEST)

As Australian health authorities battled to control an unprecedented spread of the mosquito-borne Japanese encephalitis virus, social media posts claimed the potentially deadly virus was an adverse effect of the Pfizer-BioNTech Covid-19 vaccine. But the posts -- shared hundreds of times -- are false. Health experts told AFP there is no link between encephalitis -- an inflammation of the brain -- and the Pfizer-BioNTech vaccine. The posts misrepresented a document that Pfizer submitted to the US Food and Drug Administration (FDA).

"Australia is in the grip of an Ensephalitis [sic] outbreak. Would you believe... Encephalitis is listed on the Pfizer documents..." reads the text on an image shared in an Instagram post on March 9, 2022.

The caption reads: "Another Strange Coincidence... Australia in the grip of a devastating Encephalitis. Pig/Mosquito outbreak which causes brain swelling... Would you believe by sheer coincidence that this very condition is one of the 1300 listed in The Pfizer Documents..." 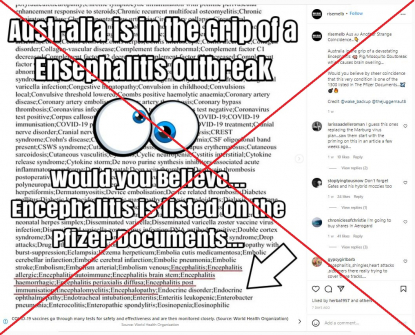 A similar claim that the disease is linked to the Pfizer-BioNTech vaccine was also shared hundreds of times on Instagram here; on Facebook here; and on Twitter here.

A spokesperson for Australia's Department of Health told AFP there was no established link between Japanese encephalitis and the Pfizer-BioNTech vaccine.

"There is no recognised or expected link between the [Pfizer-BioNTech vaccine] and Japanese Encephalitis," the spokesperson said.

"Encephalitis from causes other than the [Japanese encephalitis virus] is also not a recognised side effect of [the vaccine]."

The spokesperson added each case of Japanese encephalitis infection is confirmed by testing to eliminate other causes.

Alexander Khromykh, professor of virology at the University of Queensland, told AFP that "there is no scientific reason why and how the Pfizer-BioNTech vaccine could cause Japanese encephalitis."

"Encephalitis and encephalomyelitis can be caused by a range of viral and bacterial infections which could be undetected at the time of vaccination but coincide with detection of these adverse effects after vaccination."

The document the misleading posts appeared to reference is a submission from Pfizer to the US Food and Drug Administration (FDA).

It was obtained from the FDA through a freedom of information request by a US-based nonprofit called Public Health and Medical Professionals for Transparency.

The document has previously been a focus for misinformation, as debunked by AFP here.

The document includes adverse event reports up until February 28, 2021 that were collected by vaccine surveillance programmes, including the Vaccine Adverse Event Reporting System (VAERS) in the US.

However, reported adverse events are not necessarily caused by a particular drug.

"The event may be due to an underlying disease or some other factor(s) such as past medical history or concomitant medication," the document states.

A spokesperson for Australia's Department of Health told AFP: "The Pfizer report, which was provided to the FDA, is an analysis of Pfizer’s safety database. It did not find any new safety concerns and supports the favourable benefit-risk profile of the vaccine."