Four images have been shared hundreds of times on Facebook alongside a claim they show a Russian aircraft shot down by Ukrainian forces near the capital Kyiv. But these images were shared in a false context. Although Ukraine's armed forces announced it downed an enemy jet in the Vasilkiv area south of Kyiv, the images shared in the posts have circulated online years before Russia's invasion, including in reports about a 2015 airstrike in Yemen.

The images were published here on Facebook on March 8, 2022, and have since been shared more than 120 times.

The Burmese-language post translates as: "[Vladimir] Putin's gigantic four-engine Il-76 was carrying tanks, military equipment and soldiers when it was shot down by Ukrainian forces near the capital Kyiv. This is karma, Putin. May the Ukrainian civilian resistance be successful." 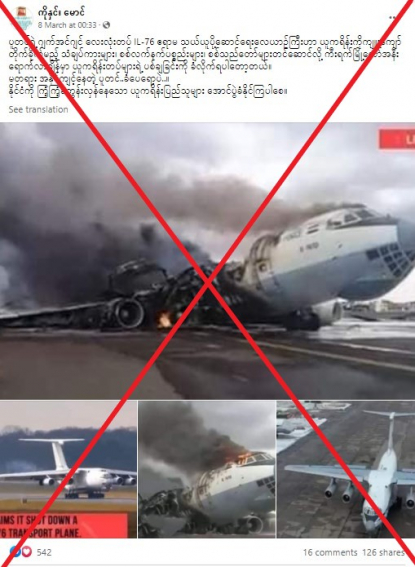 The post circulated online after the General Staff of the Armed Forces of Ukraine announced here on Facebook on February 26 that Ukrainian forces shot down Il-76 aircraft in the Vasilkiv area.

Russian President Vladimir Putin announced the launch of a military operation against Ukraine on February 24, 2022.

The crisis in Ukraine, in which Putin has sought to eradicate pro-Western leanings in the ex-Soviet state, has triggered the largest refugee crisis in Europe since World War II.

Identical images were also shared alongside a similar claim on Facebook here, here, here and here.

Two of the images in the false post correspond to the 45-second mark of this video published by the Associated Press news agency on May 5, 2015.

The report reads, "Airstrikes led by Saudi forces in Yemen destroyed airplanes at an airport in Sanaa, including a cargo jet being used to transport food and supplies into a remote part of the country. (May 4)"

Below is a comparison of the images from the false post (left) and the video from Associated Press (right). 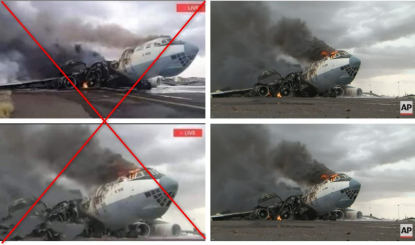 A similar image was also published by the Australian news service SBS News in a report about Yemen airstrikes on May 5, 2015.

Another image in the false post corresponds to the 13-second mark of this YouTube video posted on March 12, 2016.

The video's caption states in part, "This Ilyushin IL-76 performed a stunning landing at Eindhoven last monday. At first it looked like a normal landing but after touchdown the nose went up and for a few seconds I thought they were doing a go around."

The video was posted on a verified channel called Cargospotter which has been posting takeoff and landing footage of planes taken at various airports.

Below is a screenshot comparison of the image in the false post (left) and the frame from the YouTube video (right).

The last image in the post corresponds to the one-second mark of this video published on the YouTube channel of Russia's Ministry of Defence on March 2, 2020.

The caption to the video states it shows a training exercise carried out by military crew based at the Migalovo airfield in Tver, northwest of Moscow.

Below is a comparison of the image from the false post (left) and the opening frame of the defence ministry's video (right).

Russia's invasion of Ukraine has prompted a spike in online misinformation. AFP has debunked multiple other claims here.