An image appearing to show a Sinhala-language newspaper article about a Sri Lankan opposition leader pledging to fix the island nation's dwindling economy "within 100 days" of coming to power has been shared hundreds of times on Facebook. The image, however, has been doctored. The newspaper told AFP it did not publish the purported article, and an analysis of the politician's remarks from the day before the supposed publication date found he did not make the alleged pledge.

"When the country is handed over to us, we will end the economic crisis within 100 days", reads the Sinhala-language headline of the purported newspaper article shared in this Facebook post on March 13, 2022.

The South Asian nation is battling its worst economic crisis in more than 70 years, with the island's key tourism sector ravaged by the coronavirus pandemic.

Dwindling foreign exchange reserves have resulted in price hikes for food and medicine, while fuel and electricity is being rationed.

Frustration with the government's handling of the crisis is growing, and angry protesters clashed with heavily armed police on the streets of the capital, Colombo, AFP reported.

The pledge to end this crisis was attributed to the founder of the National People Power (NPP) coalition and leader of the People's Liberation Front (known locally as JVP) party, Aruna Kumara Dissanayake, who is a frequent target of misleading claims circulated online.

More detail about the supposed pledge is included in the body of the purported article, which carries the byline "Ranga Bandara".

The Sinhala-language text translates to English as: "National People's Power leader Anura Kumara Dissanayake yesterday (11) said a government led by the NPP will completely resolve all crises that Sri Lanka is facing at present within 100 days. (Continued Page 6)".

The article does not include a publication date, but the text suggests Dissanayake made the comments "yesterday (11)" -- indicating March 11. The picture was shared hundreds of times in multiple Facebook posts, including here and here.

Comments on the posts suggested some social media users believed the article was genuine, but had little faith in the ability of Dissanayake's JVP party to deliver on the pledge.

One comment read: "JVP's history is written with instances of destroying whatever was built and not in terms of creating or innovating."

Another Facebook user wrote: "We can be sure that you lot will ruin whatever is left within 10 days of getting elected -- if that were to happen -- let alone 100 days".

The purported newspaper article used in the misleading Facebook posts shares similarities with the layout and design of articles carried on the front page of the Sinhala-language daily Lankadeepa.

However, the digital edition of Lankadeepa's March 12 edition -- published the day after Dissanayake's alleged remarks -- shows the purported article did not appear on its front page.

Text and images surrounding the article featured in the misleading posts match content surrounding an article that did appear on the March 12 edition.

Instead of the purported article about Dissanayake, the page features a story about a court case involving the wife of a former minister.

Below is a screenshot comparison highlighting the similarities between the content surrounding the article shared online (left) and the actual front page of Lankadeepa's March 12 edition (right): 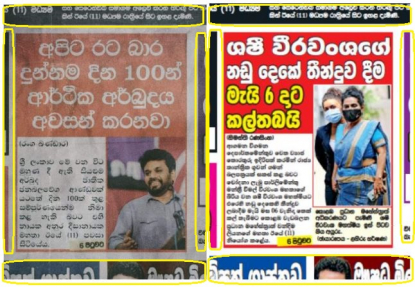 A comparison of the doctored image (left) and the frontpage of Lankadeepa (right).

A spokesperson for Lankadeepa told AFP the purported article about Dissanayake was not published on the front page of the newspaper's March 12 edition.

"Although the [design and layout] looks very similar, a read through the text shows multiple spelling errors. Given this is front page copy, such glaring spelling errors would not have been permitted to go to print by the editor or proofreaders," the spokesperson said.

The spokesperson added that the newspaper did not employ a journalist by the name of "Ranga Bandara" -- the byline included on the purported article in the misleading posts.

AFP analysed footage from a press briefing hosted by Dissanayake on March 11, but found no mention of the supposed pledge highlighted in the misleading posts.

In the 32-minute briefing, Dissanayake highlighted the economic problems that had gravely impacted the lives of Sri Lankans, calling on the country's president to announce a plan to resolve them.

However, he did not say he could fix the economy within 100 days if his coalition were to lead the government, as the purported newspaper article stated.

AFP has debunked several claims targeting Dissanayake here, here and here, as well as misleading claims about his JVP party here and here.