Skip to main content
Anura Kumara Dissanayaka (C), leader of the Marxist JVP or the People's Liberation Front, is garlanded after submitting nominations to stand in up-coming parliamentary elections in Colombo on July 13, 2015 ( AFP / Ishara S.KODIKARA)

Facebook posts purport to share a quote from the leader of a Sri Lankan opposition party apparently telling a YouTuber that the cash-strapped island should produce box office hits like "Spider-Man" to tackle its foreign exchange crisis. The claim is false; the politician made no such comment in an interview with an online talk show host, while his party said the quote was a "complete fabrication".

The purported quote was shared on January 3, 2022 on a Facebook page with more than 68,000 followers that pledges support for Sri Lankan President Gotabaya Rajapaksa.

"Sudaththa, if you'd studied international cinema, you would have noticed that the "Spider-Man" movie that premiered on December 17 has earned a revenue of $2 billion within its first two weeks! Our country's entire foreign exchange reserves is only $3 billion. Why can't we do these? Rulers who held night races should be ashamed of themselves," the Sinhala-language text reads.

'Rulers who held night races' is an apparent reference to two drag racing events in the capital Colombo held under the presidency of now-Prime Minister Mahinda Rajapaksa.

"Within the first year in a government that we lead, one of the main actions we will implement is the production of two films of the same calibre as "Spider-Man". The country's dollar crisis will be resolved immediately! These are simple and quick solutions for the economic crisis. It's very simple," the post continues.

Text at the bottom of the purported quote reads, "Anura Kumara Dissanayake at the Talk with Sudaththa programme". 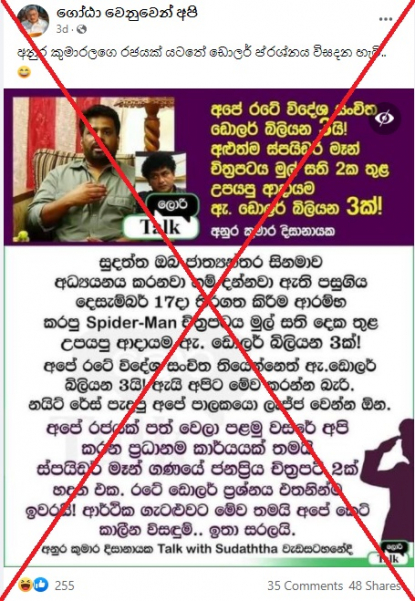 Similar claims were made on Facebook as seen here and here.

Sri Lanka's tourism-dependent economy has been hammered by the pandemic and its depleted foreign exchange reserves have led to food rationing at supermarkets and shortages of essential goods.

The island's foreign reserves slumped to $1.58 billion at the end of November 2021, down from $7.5 billion when Rajapaksa's government took over in 2019.

The central bank has been appealing for foreign currency -- even loose change that people may have after returning from overseas trips -- as the government desperately looks for dollars.

However, the claim is false; the quote attributed to Dissanayake is fabricated.

Dissanayake's interview with Sudaththa was live-streamed on the YouTuber's channel on January 2, 2022.

AFP analysed the two-hour broadcast and found the politician did not utter the quote about producing box office hits to remedy the foreign exchange crisis.

A JVP spokesperson told AFP on January 5 that the claim was a "complete fabrication".

The JVP has been targeted by multiple false claims on social media, including here and here.