Facebook posts circulating in Sri Lanka purport to show a photo of Prime Minister Mahinda Rajapaksa in November 2021 meeting members of an opposition party that has been critical of his family's politics. The claim is misleading; the photo was taken in March 2019, when Rajapaksa was leader of the opposition. A spokesperson for the JVP said on November 16 there had been no recent meeting between Rajapaksa and top party officials.

"From village to village, all the way to Medamulana," reads a Sinhala-language Facebook post from November 15 shared more than 500 times.

The campaign, which aims to tackle issues affecting rural communities, uses the Sinhala-language slogan "Gamen patangamu", which translates as "let us start from the village".

Medamulana is a village in southern Sri Lanka where the powerful Rajapaksa family have their ancestral home.

The Facebook post appears to suggest that the JVP is cosying up to Rakapaksa, despite proclaiming to stand against him. 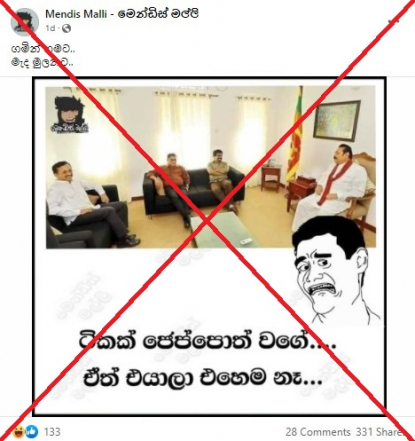 The post's caption reads: "Looks a little like JVP-ers also / but then again, they are not like that".

"And their campaign claims they are the alternative!" one person commented.

"They are all friends eventually," another wrote. 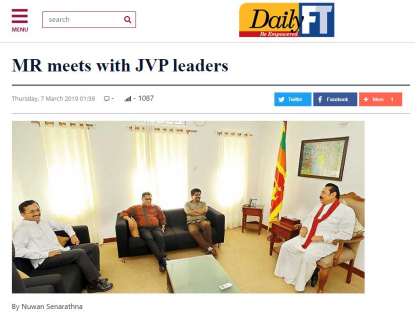 Screenshot of the photo published in Sri Lankan newspaper Daily FT in March 2019, taken on November 21, 2021

The politicians met to discuss issues such as abolishing extra powers given to the country's president, known as the 'Executive Presidency'.

"None of the JVP top officials have met with the prime minister recently," he told AFP on November 16.

In 2019, the JVP met with opposition leaders as well as Sri Lanka's ruling party to discuss abolishing the Executive Presidency.

Unchecked presidential powers were seen as a key reason for the 2018 political crisis in Sri Lanka, in which then-president Maithripala Sirisena sacked his prime minister Ranil Wickremesinghe and replaced him with Mahinda Rajapaksa.

Rajapaksa resigned after a few weeks and became leader of the opposition before he was reappointed prime minister the following year by his brother, who had by then been elected president.

The JVP and Mahinda Rajapaksa have had a tumultuous political relationship. In 2005, the JVP supported Rajapaksa when he ran for president, but they parted ways the following year.

The JVP has since held a critical stance of Rajapaksa governments, accusing the ruling family of nepotism and corruption.