An image has been shared hundreds of times in Sri Lankan social media posts that claim it shows a helicopter set ablaze in the late 1980s by members of the political opposition party People's Liberation Front, locally known as JVP. But the image has been shared in a false context; it was actually taken from the popular war-themed video game Call of Duty.

It was posted in a public group that says it supports Sri Lankan President Gotabaya Rajapaksa. 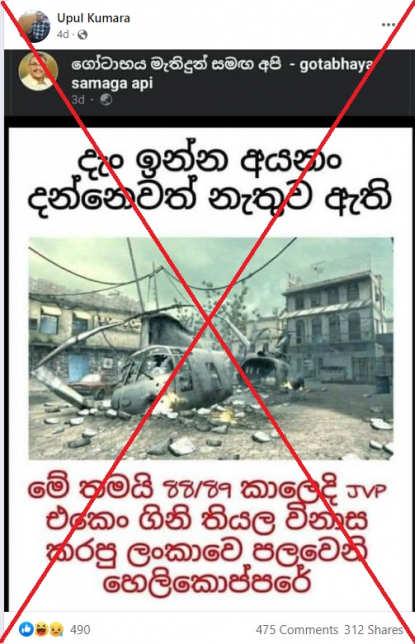 The image's Sinhala-language text overlay translates as: "The young ones may not even know / This is the first helicopter set on fire by the JVP during the 88/89 insurrection".

The Marxist JVP led an uprising against the ruling government in Sri Lanka between 1987 and 1990. Authorities have said tens of thousands were killed during the insurgency, a figure which includes rebels and their victims.

Government forces had crushed the rebellion by wiping out its entire political leadership by the end of 1989 and mopped up remaining activists by early 1990.

However, the JVP slowly re-emerged in 1994 and has since renounced its armed struggle and entered mainstream politics. The JVP party currently forms the country's political opposition.

An identical image was also shared on here and here alongside a similar claim.

Some social media users appeared to think the image showed a real helicopter.

"There is no point in bringing up the past anymore, we are with the JVP this time", one wrote.

Another said, "So what? This is in the past. Recent rulers have siphoned public money so much more than that".

In reality, the image was taken from a video game.

A reverse search on Google found a nearly identical image published in this November 2 article on the video gaming website GameSpot.

AFP was able to further confirm the image corresponds a scene in Call of Duty's Crash map upon exploring the video game. Below is a screenshot of the Crash map captured by AFP on December 21:

Screenshot of the crash map captured by AFP on December 21, 2021

Below is a screenshot comparison between the image in the misleading posts (L) and the AFP capture of the Call of Duty's Crash map (R):

A similar image was also featured in this YouTube video about Call of Duty.

Below is a screenshot comparison between the image in the misleading posts (L) and the YouTube video (R):

An AFP review of historical accounts of the JVP insurgency in Sri Lanka in the late 1980s found no references to rebels setting a helicopter ablaze.

The JVP was previously the subject of misleading online posts claiming its members were represented in court by Prime Minister Mahinda Rajapaksa in his youth. AFP debunked the posts here.