A video of Russian President Vladimir Putin ignoring his official motorcade to go for a walk has been viewed millions of times on Facebook alongside claims that it shows his frustration following a recent press briefing related to the Ukraine invasion. However, this is false; the video is from 2013 and was taken after Putin attended the funeral of his long-time judo trainer.

The video, which has been viewed more than 30 million times here on Facebook, claims to show Putin ditching “his presidential Motorcade to walk home after a press briefing (sic)”.

Another post published on February 27, 2022 with the same video repeats the claim but adds that the press briefing took place “today”. Other posts from March 1, 2022, claim that the video shows Putin is “already frustrated” in the wake of his country’s military offensive in Ukraine. 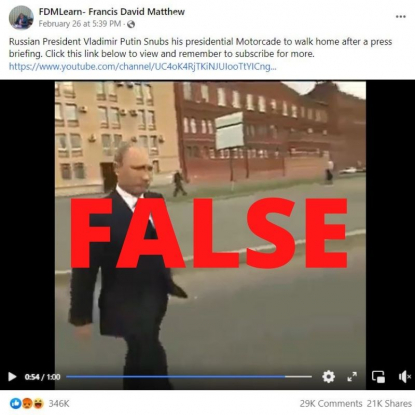 A screenshot taken on March 7, 2022, showing one of the false Facebook posts

The video circulating on social media, however, is unrelated to the war in Ukraine.

Putin after a funeral

Reverse image searches of multiple frames from the video led to reports and footage on YouTube from August 2013 – eight years before the events of recent weeks in Ukraine.

According to this report from RIA Novosti, a Russian state-owned domestic news agency, Putin had just attended the funeral of his judo trainer and mentor when he chose to walk instead of using his presidential car.

The Moscow Times also reported on the Saint Petersburg funeral of judo coach Anatoly Rakhlin, who died on August 7, 2013.

The footage was broadcast internationally by Sky News, Independent UK, and Foreign Policy in August 2013. According to Sky News, the video shows “Mr Putin emerging from the service for Anatoly Rakhlin in his native city of Saint Petersburg and waving away his official car”.